by MICHAEL R. SISAK and TOM HAYS, The Associated Press 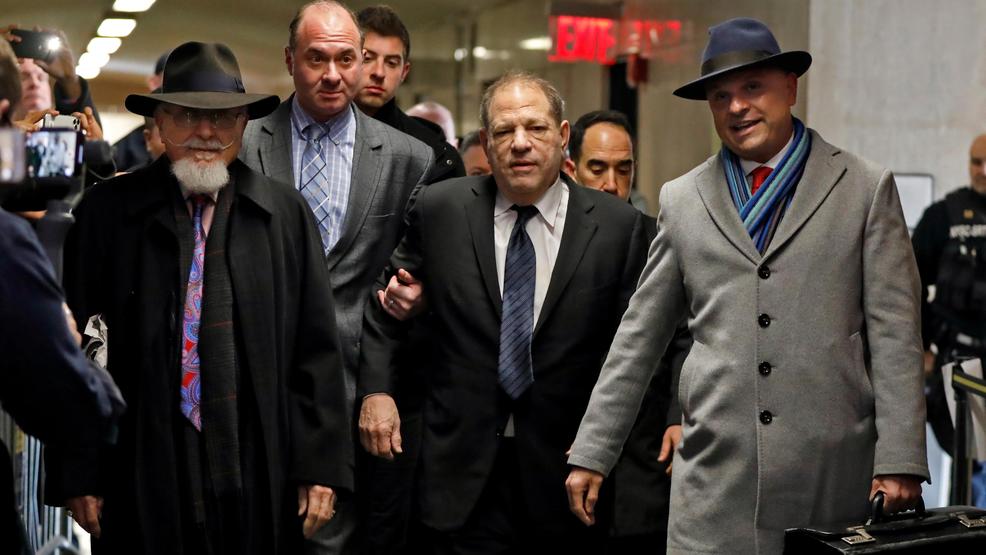 NEW YORK (AP) — Harvey Weinstein went on trial Wednesday in a landmark moment for the # MeToo movement, with prosecutors painting him as a sexual predator who used his movie-magnate stature to abuse women for decades, while his lawyers sought to discredit his accusers and portray the encounters as consensual.

Prosecutor Meghan Hast told the jury of seven men and five women that the former studio boss was "not just a titan in Hollywood — he was a rapist" who screamed at one victim that she "owed" him sex, used injections to induce an erection before an assault and pushed his way into the apartment of another woman and assaulted her.

"It is for his complete lack of empathy that he must be held accountable," Hast said.

Weinstein lawyer Damon Cheronis countered by laying out plans to use friendly-sounding emails, calendar entries and other evidence to call the accusers' accounts of being attacked into question.

The opening of the rape trial more than two years after a barrage of allegations against Weinstein gave rise to #MeToo was seen by activists as a milestone in the global reckoning over sexual misconduct by powerful men. Weinstein's lawyers, though, have portrayed the case as the result of a climate of accusation run amok.

Weinstein, 67, said little as he arrived at court. Asked whether he believed he would have a fair trial, he said yes: "I have good lawyers."

Guided by aides and lawyers, he wasn't using the walker he has leaned on lately after a summer car crash and subsequent back surgery. He said he was feeling better.

The once-powerful and feared executive who brought to the screen such Oscar-winning movies as "Pulp Fiction," "The King's Speech," "Shakespeare in Love" and "Chicago" has insisted any sexual encounters were consensual. He could get life in prison if convicted.

Though scores of women have accused Weinstein of sexually harassing or assaulting them over the years, the New York charges are limited to two allegations: that Weinstein raped an aspiring actress in a New York City hotel room in 2013 and forcibly performed oral sex on another woman in his apartment in 2006.

The rape accuser found a needle in the hotel room bathroom after the alleged assault and realized Weinstein had injected himself to get an erection, Hast said.

Another time, after the woman told him she had a new boyfriend, Weinstein dragged her into a bedroom, "all the while screaming at her that he owed her one more time," Hast said. "He ripped her jeans off so forcefully that it left scratch marks."

The prosecutor said Weinstein later told the woman, "I just want to apologize for what happened earlier. I just find you so attractive, I couldn't resist you."

In addition to the two women he is charged with attacking, prosecutors plan to call to the stand four other accusers -- including actress Annabella Sciorra — in a bid to portray Weinstein as a monster who lured women with offers of career help, then forced himself on them.

"They will each describe their fear, their shame and their humiliation — the struggle each went through to push their trauma down and show a brave face to the world," Hast said.

Hast detailed allegations that Weinstein sexually assaulted Sciorra around 1993 after giving the "Sopranos" actress a ride home to her Manhattan apartment and forcing his way inside.

"She told him to get out. She told him no. But Harvey Weinstein was undeterred," Hast said. She said the actress eventually stopped fighting Weinstein, "hoping it would end," and was left "emotionally and physically destroyed, passed out on the floor."

Weinstein's lawyers made clear they intend to go on the offensive.

Cheronis said the 2013 rape accuser sent Weinstein a request that year asking for "time privately" with him and another message letting him know, "I got a new number. I just wanted you to have it. Always good to hear your voice."

Cherinos said: "These aren't our words. They're hers. It is not a relationship based on fear, you are going to see that."

The Associated Press does not typically identify people who say they have been victims of sexual assault, unless they come forward publicly.

Weinstein's trial could take more than a month, Judge James Burke said. Judging from the arduous two weeks of jury selection, it could be a hotbed of protests and intense media coverage.

In a failed last-minute push to get the trial moved, Weinstein's lawyers said protesters' chants of "The rapist is you!" at street level earlier this month could be heard in the courtroom, 15 floors above.