A peek at off-camera happenings at the Academy Awards 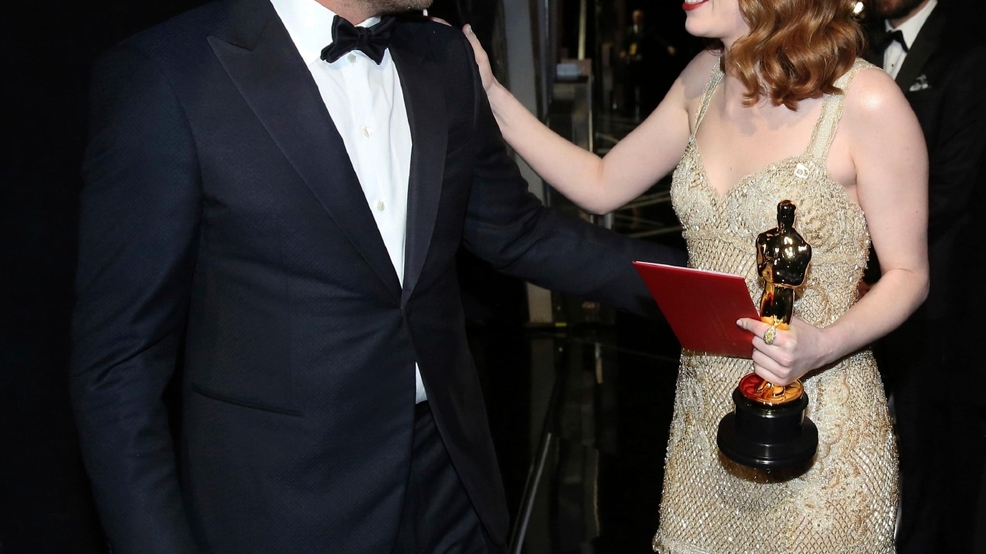 LOS ANGELES (AP) While the whole of Oscar night was eclipsed by the unprecedented best-picture flub at the show's conclusion, the Academy Awards is a starry celebration onscreen and off. For every memorable moment during the telecast, countless others occur away from the camera's eye in the wings of the Dolby Theatre stage.

Here's a look at a few key moments you didn't see during the show.

BEST SHOW EVER: Jimmy Kimmel's team of writers and producers did the same "Best show ever!" chant before the Oscars that they do before each taping of "Jimmy Kimmel Live!"

After the show, amid the confusion over the best-picture mix-up, writer-comedian Adam Carolla proposed a toast to the host outside his dressing room.

"How impressed are we with Jimmy?" Carolla said. "We'll never forget this Oscars. Remember when he hosted that one where they screwed up the envelope?"

The comic added that though he's cracked about the Oscar-hosting gig, "I secretly really did want to be asked."

As far as the final award gaffe, Kimmel said, "I still don't know what happened."

Then his team sent him off with a concluding chant of "Best show ever!" and Kimmel and his wife headed to the Governors Ball.

Before the show began, Legend told his wife, "You look so pretty," before tucking a lock of hair behind her ear.

Once the show began, Teigen noticed that Ryan Gosling was walking behind her and Legend toward the green room.

"Your best friend's behind you," Teigen told her husband.

"John drops your name every time," she said to Gosling, who blushed but blew it off.

Legend insisted that he had to change clothes to perform his "La La Land" medley, but Teigen convinced him to get a cocktail first.

"Let's get a drink, then change and go pee," she offered, and Legend followed her to the green room.

Judd Apatow and Leslie Mann are also in the running for cutest Oscar couple. Apatow accompanied his wife backstage as she prepared for her Oscar moment: introducing the film academy's scientific and technical winners. Apatow handed her a bottle of water with straw in it and kissed her cheek before she took the stage. Then he documented her big moment, capturing cellphone footage while she was onstage.

When she finished her lines and returned backstage, Apatow told her, "That was great!"

He chatted about his Oscar number and upcoming projects, leaving behind a small plastic cup he'd sipped from during the taping.

After he left the interview space, Ripa said: "We're going to auction this off on eBay. This was Justin's cup."

Though he was already walking away, Timberlake made an abrupt turn to collect his refuse, saying, "I'll take that."

The cup hasn't yet shown up on eBay.

GO TIME? Meryl Streep was taking a sit-down break backstage before her presentation duties. But when an announcer said, "Coming up, Meryl Streep," the actress hopped up from her seat.

The announcer was indicating what was to come after a commercial, but Streep was instantly on edge.

"What?!" she said, jumping to her feet and preparing to take the stage.

"That was a moment," Javier Bardem said with a smile.

"It's happened before," Streep said.

TEENAGE DREAM: Sixteen-year-old Auli'I Cravalho, who voices the title character in "Moana," made her stage debut in front of an audience of millions Sunday.

Before Cravalho took the stage to sing "How Far I'll Go," from the film, songwriter Lin-Manuel Miranda introduced her performance with an original rap.

He stayed in the wings of the stage to watch her performance on a monitor. When she finished the song flawlessly, Miranda clapped, jumped and shouted, "Wow."

Cravalho got more kudos after coming offstage. She passed Janelle Monae in the hallway, who told her, "You're beautiful, and you're darling, too."