Arizona girl with cancer now in remission, gets to meet Taylor Swift in person 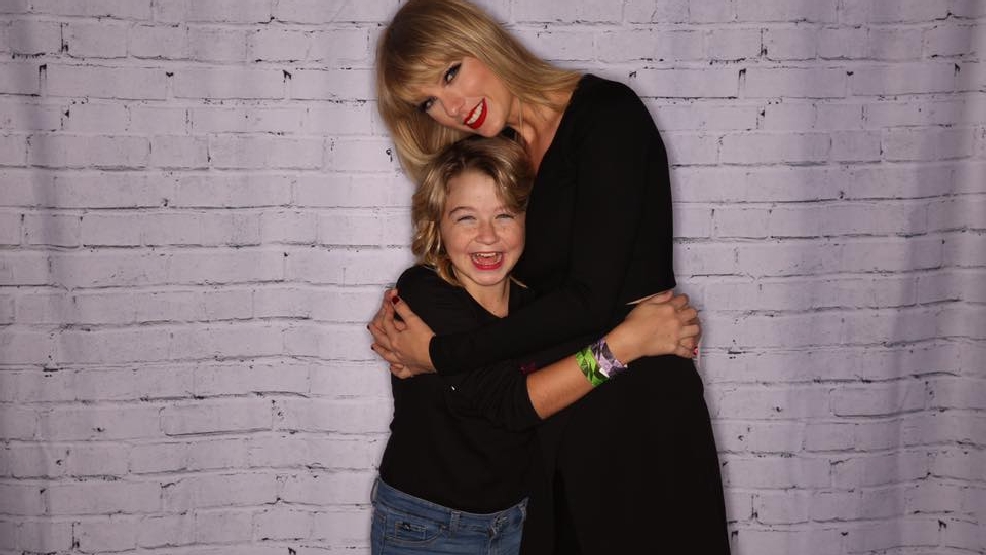 (KUTV) A year ago an Arizona girl was fighting for her life after being diagnosed with cancer and used Taylor Swift's song "Bad Blood" as her fight song. On Saturday stood feet away from her idol Taylor Swift as she victoriously sang that anthem along with the pop star at a concert in Texas.

Last year, 12-year-old Naomi Oakes, who lives in Arizona, but has family in Utah, missed out attending Swift’s August show of the “1989” World Tour, because it was in the middle of her treatment.

She learned in June she had been diagnosed with Acute Myeloid Leukemia. The childhood blood cancer might have stopped her from attending a concert, but it couldn't stop Naomi from fighting to get well again.

The video a family friend created titled “Naomi’s Bad Blood” went viral and reached the eyes of Taylor Swift. The pop star made a generous donation of $50,000 to Naomi’s GoFundMe page. At the time Naomi's uncle, Robert Percival, told KUTV of the donation.

"I broke down and cried," he said. "It's just amazing that there's somebody with her celebrity that would think about people and be able to donate. It's just great."

Along with the donation, Swift left a message that stated: “to the beautiful and brave Naomi, there are going to be plenty more concerts to attend, just focus on getting better.”

Naomi, of the Mesa, Arizona area, did just that and went through four rounds of chemotherapy and was able to take a 6-9 month hospital stay expectation and turn it into getting out in five months. She finished up chemo treatments in November.

Last year, Naomi’s mother Shannon Oakes bought her daughter tickets to Taylor Swift’s “1989” show, but Naomi was never able to go because of her cancer.

After hearing her daughter had a clean bill of health she wanted to try and make it up to Naomi. So for six months she kept a secret about some tickets she bought for an October show at a Formula 1 race in Austin, Texas. She was also able to get Swift’s people to arrange a meet and greet with her daughter.

A week before the trip, Shannon recorded Naomi’s reaction to what they were planning to do. They were going to Texas, but Naomi didn’t know what for.

As the day of the concert got closer, Shannon revealed that she got tickets for an event in Austin, Texas and asked her daughter if there was anything in Austin she would like to do.

“She knew right away,” Shannon said. “She said, ‘Taylor Swift.’”

Naomi also found out she would be going with her best friend Piper, who is from the Salt Lake City, Utah area. A bus even came and took the girls to the pit, right up next to the stage.

The two girls got to go back stage and meet Swift.

“Taylor Swift has got to be one of the nicest people in the world,” Shannon said adding that they didn’t know what to expect, or if Taylor would even remember Naomi.

When Naomi walked in it was clear Swift knew exactly who she was.

“I just found out five minutes ago that you were coming back and that just made my day,” Swift said.

Naomi replied with a smile, “Well you just made my life.”

Shannon said all she and her daughter ever wanted to do was give Swift a hug because of the monetary donation she made in 2015, that “made such a huge difference” to help cover medical costs.

Aside from the physical battle of cancer, there is a mental battle too, Shannon says adding that staying positive is important in helping overcome cancer.

Fighting cancer is deeply personal for Naomi, even though her cancer is in remission. In March she lost a friend who she was in the hospital who also had leukemia.

“She feels this need to help others and raise awareness,” Shannon said.

Naomi considers herself lucky to be able to be alive and to share her experience with others.

“Cancer is a tough thing for these kids and their parents and we want to be able to do something for those still fighting that battle,” Shannon said.

In addition to Naomi going to different high schools educating others on her story battling leukemia, her family held a fundraiser event for two kids battling cancer and raised over $10,000.