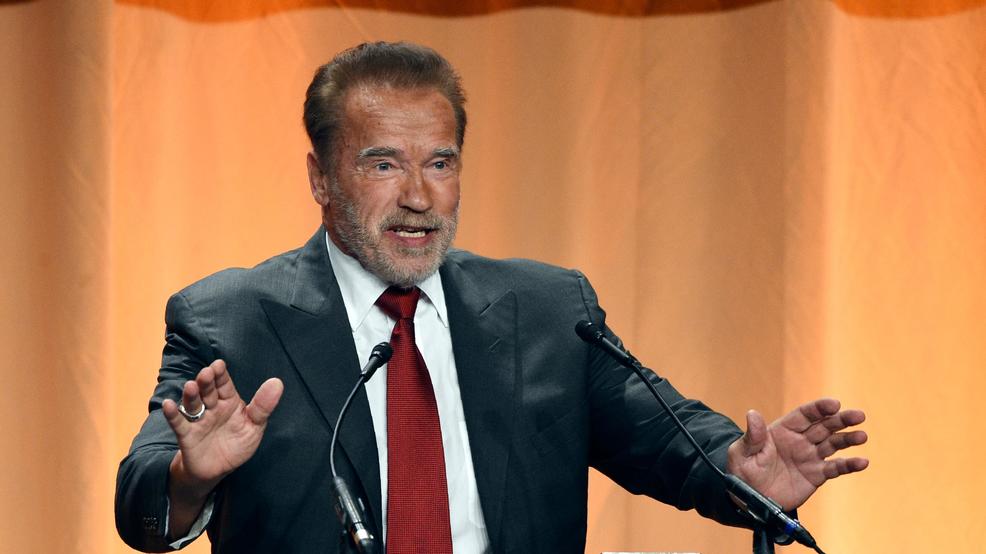 The former California governor remembered when he was asked a couple questions about Trump during an interview before being offered to host the star-studded ceremony. He recalled during his opening speech that he had "nothing nice to say about the guy."

The event was held at the Beverly Wilshire Hotel, where more than a dozen film and TV stars helped the group that put on the Golden Globes announce proceeds to 74 film schools and arts organizations.

Schwarzenegger said the HFPA's efforts are important to him and has a special connection with the group because "I am actually foreign." His remarks come after Trump tweeted that four Democratic congresswomen of color "go back" to countries from "which they came from."

"And I have chosen not to 'go back to my country', but stay here, live here and make a difference here," Schwarzenegger added. "And to me, that is what makes America great."

The celebrity presenters handed out $3.8 million in grants during the hour-long ceremony. Each presenter only spent a few minutes onstage.

Regina Hall and Rob Lowe were one of the few presenters who went off script, as both playfully flirted with each other onstage while they announced the grant for The Film Collaborative. The grant would support educational tools and resources for independent filmmakers.

"I remember being a young girl, lying in my bed, praying to God that Rob Lowe would be on top of me," Hall said, prompting the audience to burst into laughter. "Prayers are answered, which is why we are here tonight."

When Lowe spoke, Hall stepped behind him with a grin. He glanced over his left shoulder at Hall as the audience continued to chuckle.

Washington announced a grant to Pen in the Community, which offers journalists workshops to improve news literacy. It'll also highlight the importance of press freedoms in underserved schools in the Los Angeles area.

"In today's very fraught political climate, it is more important than ever that we have the balance of objectivity and in-depth content of independent journalism to rely on," the actress said.

"Rocketman" star Taron Edgerton, who stood alongside co-star Jamie Bell, presented a gift to several organizations including The Latin America Cinemateca of Los Angeles. Bell spoke about the HFPA's efforts to humanitarian relief.

Director Taika Waititi highlighted the HFPA's efforts to help women who want to work behind the camera. He said the group is supporting several initiatives including Women in Film, Women Make Moves and Directing Workshop for Women.

Julia Butters, who starred in "Once Upon A Time in Hollywood," introduced "Booksmart" star Beanie Feldstein and actor Ben Platt, who sang a duet.

Corden announced a grant to Get Lit, which helps get equipment, production, classroom supplies and stipend for Literary Riot for the first content production studio created and run by filmmakers between the ages of 13 to 23. He also jokingly made a promise about the "disappointing" dessert being served at dinner.

"I will pledge right here, right now. And I'm serious. I will fund the dessert for next year," said Corden, whose statement drew applause.