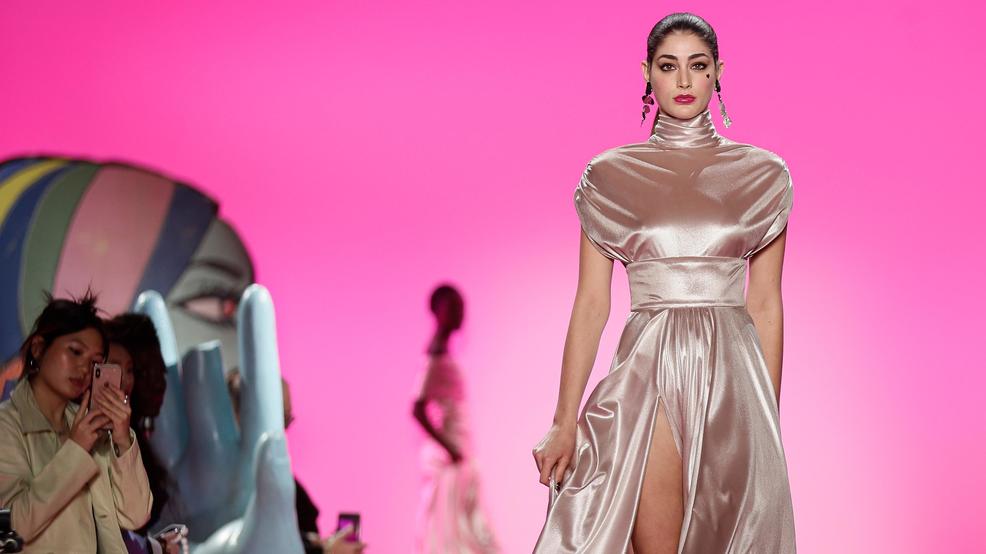 The “Saturday Night Live” alum could barely contain herself, hopping out of her seat at times to cheer on models as Heidi Klum looked on.

In a backstage interview, Siriano told The Associated Press he drew inspiration in part from the DC Comics superhero film “Birds of Prey," the story of how Harley Quinn joins forces with others to battle crime lord Black Mask.

Column gowns came in “Joker” Jacquard and multicolored “Harley” fringe. Among Siriano's finale looks were architectural mermaid gowns in a sparkly silver crystal and black print with boxy waists, worn with wide-brim hats. There was ample black, and velvets in blush and fuchsia. He also put out gowns, cropped blazers and flare trousers in eggplant.

Siriano said he let his imagination run wild as he jumped off from Quinn's story.

“Everybody has a little inner Harley Quinn. She's rock and cool and edgy and dark, which this collection has, but how do we elevate her, make her a little more glamorous, somewhat more put together? In the film there's this really cool kind of gothic funhouse, so that set the tone,” he said. “That got me to look into surrealist paintings and the Dada art movement, so that inspired a lot of the sculpture.”

There was a lot of shine, texture, reflected light and sparkle in tiered ruffles, sequin fringe and shimmery knits. Siriano stayed true to a range of body types, one of the things that drew Jones to him in the first place when she couldn't find a red carpet designer who would fit her 6-foot frame.

While working on his Fall 2020 collection, Siriano was busy multitasking ahead of the Oscars on Sunday.

“It's really hard. I have literally half my team back doing Oscar dresses that are going on a plane. That's a little frustrating,” he said.

Siriano has become a red carpet mainstay for a slew of celebrities. He's the man behind Billy Porter's tuxedo gown from last year's Oscars and helped outfit Lizzo, Demi Lovato and Yola (in bright pink fringe) for the Grammys.

“I've known Lizzo a really, really long time,” he said. “Lizzo performed at my after-party like four years ago. No one even knew who she was. I love her.”