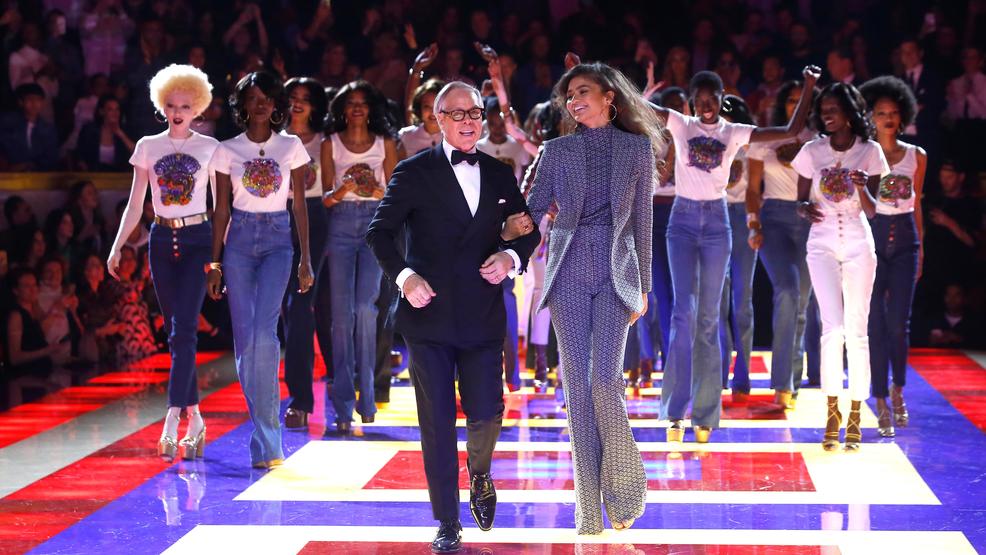 Designer Tommy Hilfiger, left, and actress Zendaya walk the runway with models at the conclusion of the Tommy Now ready to wear Fall-Winter 2019-2020 collection, that was presented in Paris, Saturday, March 2, 2019. (AP Photo/Michel Euler)

The show celebrated diversity and was, in terms of sheer energy, unlike any other so far this season. Dozens of dancers on roller skates boogied amid flashing lights to greatest hits from the 1970s.

The collection itself, sadly, felt more high-street than high-fashion and rather paled in comparison to the ambitious spectacle.

Breton stripes led down to flared denim or leather pants, torso-hugging jumpsuits and a shimmering pleated silken gown with a cape the model waved dramatically.

This fashion show was all about the show.

The show's finale track, "We Are Family", had even fashion insiders with perpetually pursed lips singing along.

Revelers danced at a wild after-party into the wee hours.

American actress and singer Zendaya, 22, became the latest in a long line of celebrities to try their hand at fashion design in Paris.

The "Spider-Man: Homecoming" star spoke to The Associated Press about receiving a phone call from Hilfiger to discuss a collaboration.

"I got a call from Tommy Hilfiger himself, which was pretty crazy. I was not expecting that," she said.

Hilfiger gave her, she said, full control of the designs, which drew inspiration from "iconic women" of the late-1970s and early-1980s.

One of the models who walked in the 1973 Versailles show, Pat Cleveland, modeled for Zendaya. Cleveland often is described as the world's first black supermodel.

THE GUEST HAS A NAME

Arya Stark from "Game of Thrones" famously utters the words: "The girl has no name."

But the actress who plays her, 21-year-old Maisie Williams, is quickly becoming a name.

She made a surprise appearance in a check suit and a funky fringe on the front row of Thom Browne's collection inside the Musee des Beaux-Arts.

Women can rule in a man's world, Browne suggested.

Stripes appeared at the cuff, owing to the shirt, suit and coat ends producing a chic, intentionally tiered effect.

Then, the playful fashion explorations began.

Business pants became preppy shorts that could have come straight out of a private school uniform.

The manly gray suits were transformed into a woman's bourgeois gray wool coat with thick bands of fur at the hem.

One of the most boundary-blurring ensembles was a three-piece checked suit that opened to reveal a pleated schoolgirl skirt with fine white stripes. A monocle-like accessory hung down over the model's face.