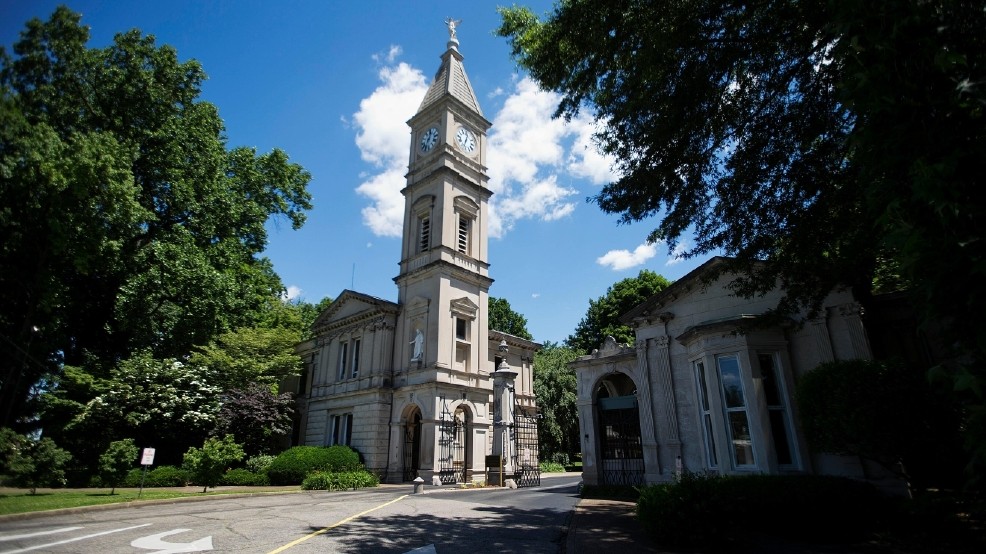 The entrance to Cave Hill Cemetery is seen Tuesday, June 7, 2016, in Louisville, Ky. Muhammad Ali's burial will be in Cave Hill Cemetery, the final resting place for many of the city's most prominent residents. The luminaries include Colonel Harlan Sanders, the founder of Kentucky Fried Chicken, whose granite memorial features a bust of the goateed entrepreneur. Ali's gravesite will far more subdued, in contrast to his oversized personality and life. A modest marker, in accord with Muslim tradition, is planned, said his attorney, Ron Tweel. (AP Photo/David Goldman)

LOUISVILLE, Ky. (AP) Every year on the same day, Muhammad Babar plans to walk past a soaring clock tower that juts 180 feet toward the sky, through a gate and into Cave Hill Cemetery, one of his city's greatest wonders.

It will be an annual pilgrimage to visit The Greatest, his hero, Muhammad Ali.

The boxing superstar will be buried at the cemetery already on the National Register of Historic Places and the final resting place of Kentucky Fried Chicken founder Col. Harland Sanders on Friday. Ali's tomb will undoubtedly become a draw for visitors from around the world.

Ali always said he wished to be buried in his hometown, where he learned to box and fought his first fight; where he built a museum and the city named a street in his honor.

He chose Cave Hill a decade ago. The challenge was deciding on a plot among its 300 acres. He toured its twisting paths, towering trees and 130,000 graves whose inscriptions assemble into a who's who of Kentucky history.

"He fell in love with this site," Gunnell said.

Ali will have a simple marker, in accordance with Muslim tradition and his wish to remain humble despite his outsized life.

Gunnell and the cemetery would not say exactly where the grave would be.

University of Louisville staff archaeologist Philip DiBlasi said Cave Hill can handle a world-famous resident. It has tall, stone walls and 24-hour security. It is also well-known for its beauty and wildlife. Cave Creek is home to more than 400 varieties of trees, with foxes, deer and peacocks skittering around.

The 24-page rules manual warns against leaving offensive items, like liquor bottles. Climbing trees, lying on graves, angry discussion and profane language are all prohibited. As are fake flowers and unnatural ornaments, like balloons or trinkets.

That hasn't stopped fans of Sanders, who died in 1980, from leaving buckets of chicken on his grave. Cave Hill painted a yellow line along the path to lead visitors from the entrance to his gravesite.

DiBlasi said he doubts that the vandalism that has haunted some other celebrity graves will happen to Ali's site.

James Dean's headstone has been stolen twice from a cemetery in rural Indiana, said Phyllis Seward, whose husband serves as the secretary of the complex, about a mile from where the heartthrob grew up. Someone tried to take a chip out of the stone, so the family replaced the headstone with one with shallow, curved carvings to deflect knives.

"They leave him beer, money, cigarettes," Seward said. "They kiss it. We have to wipe the lipstick off the headstone all the time."

Robert Fells, executive director of the International Cemetery, Cremation and Funeral Association said it is human nature for people to feel drawn to the graves of those they admire.

"That's the closest thing they'll ever get to them on the face of the earth," he said. "They ask themselves 'what can I do to know this person, to get close to this person.' It's a pilgrimage I guess."

Some visitors have something more devious planned. Someone stole Charlie Chaplin's body from his grave in Switzerland and held it for ransom, Fells said. Elvis Presley was first buried at Forest Hill Cemetery in Memphis, but his family moved him to Graceland after three men were accused of plotting to steal the body.

A man pried a bronze plaque from Mark Twain's tomb in Elmira, New York, two years ago. Even now, more than a century after the author's death, a half-dozen people show up every day, with many leaving letters or cigars, said Bryce Cuyle, the cemetery's superintendent.

"You're creating a shrine," Cuyle said.

They don't throw away the items. When it gets unsightly, they clean off the grave, put the material in a box and take it to a local Twain museum. Cuyle expects something similar to happen in Louisville.

"I'm sure for the next three, four years, that cemetery is going to have to take stuff off that marker every day," he said.

Most days, someone is hovering around Bruce Lee's grave at Lake View Cemetery in Seattle, more than 40 years after his death. Cemetery manager George Nemeth Jr. said they leave him karate belts and nunchucks, and sometimes perform martial arts routines.

For some celebrities, interest tapers off over time. Buses used to show up in droves at Malcolm X's gravesite every year on his birthday, said Joanne Aliberto, vice president of operations at Ferncliff Cemetery in Greenburgh, New York. Now only one bus comes. Judy Garland is also buried there. People used to leave flowers there every day. But now, almost 50 years after her death, her grave is often bare, Aliberto said.

Michael Lelys, executive director of the Oak Ridge Cemetery adjacent to Abraham Lincoln's tomb, says people still come by the hundreds to visit. The cemetery is the second most visited graveyard in America, after Arlington National Cemetery. Lelys watches them appraise the tomb, heads often bowed, voices lowered to a whisper.

"It feels like you're able to go back in time with that person," he said. "If you're within feet of a famous celebrity there's almost an aura, a feeling like their spirit with you."