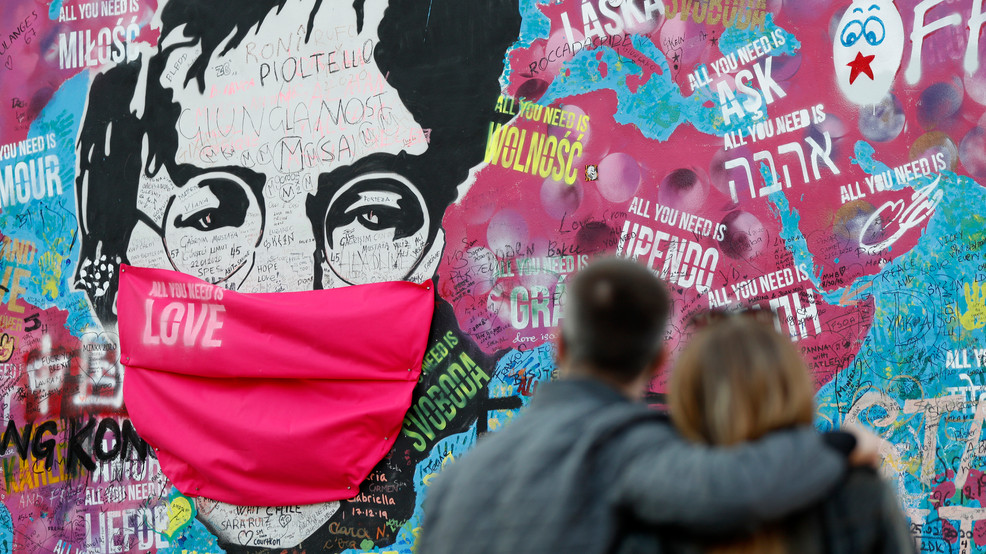 FILE - A couple look at the "Lennon Wall" with a face mask attached to the image of John Lennon, in Prague, Czech Republic, on April 6, 2020. (AP Photo/Petr David Josek)

NEW YORK (AP) — Like many other events, an annual John Lennon tribute concert that takes place in his adopted city of New York on his Oct. 9 birthday has been forced online because of the coronavirus pandemic.

There was no way it was being canceled, not on what would have been Lennon's 80th birthday, not on the tribute's 40th year.

“The idea of not celebrating John, of stopping after 39 years, never crossed my mind,” said Joe Raiola, the tribute's producer and artistic director of the Theatre Within organization.

Raiola had booked the Town Hall venue for this year's show. With the pandemic forcing it to stream for free from 7 p.m. to midnight Eastern time on the LennonTribute.org website, the event could get more exposure than ever.

Taped performances by Jackson Browne, Patti Smith, Natalie Merchant, Rosanne Cash, Jorma Kaukonen, Shelby Lynne, Taj Mahal, Marc Cohn, Joan Osborne and others will be included — many from past shows but some new.

Without ticket sales, organizers will ask for contributions for programs that benefit people affected by cancer. Theatre Within and Gilda's Club offer free workshops such as songwriting, art and meditation to cancer patients and survivors and to children who have lost parents to the disease.

Raiola and other friends began their informal tribute to Lennon in 1981, less than a year after the former Beatle was shot to death.

It stayed small, at least until 24 years in, when Lennon's widow Yoko Ono read a story about the tribute in the New York Daily News and called Raiola to say, in effect, what are you doing?

Learning more about it, she offered support, and said in a statement issued Thursday that “this is such a wonderful way to honor John and the values he stood for.”

Cash, a fellow New Yorker who was honored with the John Lennon Real Love Award in 2018, has performed the former Beatle's songs “I'm Only Sleeping” and “Look at Me” at a past tribute.

“It's one of those things that you don't often see where the same people show up every year,” Cash said in an interview. “They're devoted to it. It's not just because of John, it's out of respect for what they're doing and the community they've created.”

Raiola believes Lennon's impact was “seismic” and that the ideals he believed in didn't die with him.