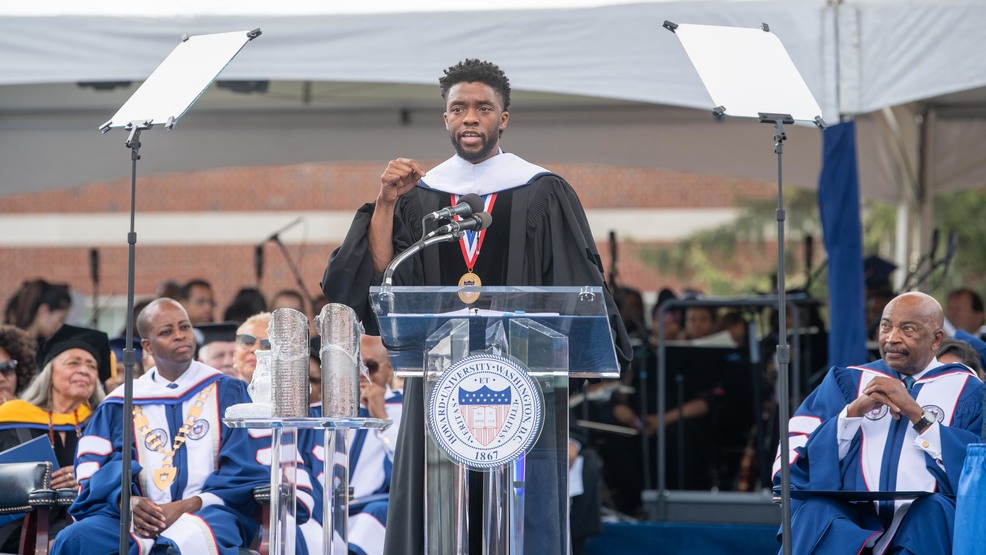 Alumnus Chadwick Boseman addresses the Class of 2018 during the Howard University 150th Commencement Ceremony on Saturday, May 12, 2018 in Washington, D.C. (Photo courtesy of Howard University)

Boseman spoke in front of a crowd of more than 8,000 at what was the school’s 150th commencement ceremony.

In his speech, Boseman – a South Carolina native who graduated from Howard in 2000 – encouraged the graduates to achieve their life’s purpose.

“When you have reached the Hilltop and you are deciding on next steps, you would rather find purpose than a career,” Boseman said. “Purpose is an essential element of you that crosses disciplines.”

In closing, he continued his message about purpose while also alluding to the popular phrase “Wakanda Forever” from the movie “Black Panther.”

“Press on with pride and press on with purpose,” he said. “God bless you, I love you, Howard. Howard forever.”

In addition to delivering the commencement address, Boseman also received an honorary Doctor of Humane Letters degree from the school at the graduation.

While best known for starring as T’Challa/Black Panther in “Black Panther,” Boseman also has starred as Jackie Robinson in “42,” Thurgood Marshall in “Marshall” and Floyd Little in “The Express,” among other movies and TV shows.

Howard University awarded 2,217 degrees, including 343 master’s degrees, and 90 Ph.Ds for the spring semester.