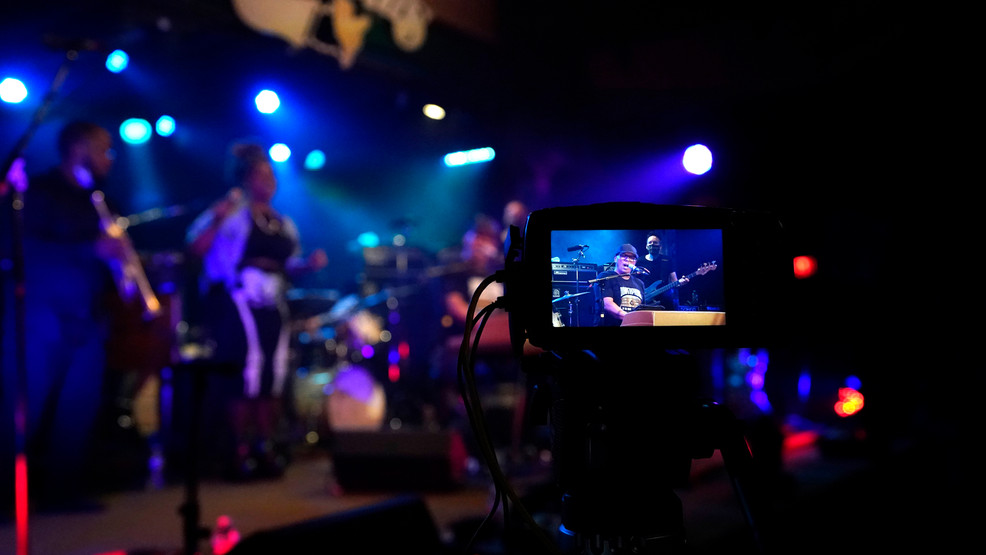 In this Oct. 26, 2020, photo, Ivan Neville is seen on a camera monitor sitting in with the band Galactic, as they record for a video stream concert, inside an empty Tipitina's music club, which the band owns, in New Orleans. Music clubs all over the nation — pop culture icons like the Troubadour in West Hollywood, the Bluebird Cafe in Nashville, The Bitter End in New York's Greenwich Village — are shuttered due to the coronavirus. And owners fear for the future of their businesses and of a musical way of life. (AP Photo/Gerald Herbert)

NEW ORLEANS (AP) — The venerable New Orleans funk band Galactic purchased the historic music club Tipitina's in late November 2018 and, according to bassist Robert Mercurio, was making a go of it.

"It's a tight-margin business but we were making our notes and fulfilling our bills and whatnot. So, it was moving along in a good direction," he said.

That was before the coronavirus pandemic forced shutdowns of public gatherings.

Audiences last packed into Tipitina's for a March 12 performance by the Stooges Brass Band. Now, Mercurio is worried that COVID-19 could prove fatal to Tipitina's, a New Orleans cultural touchstone founded in the 1970s as the performance home for the late Henry Roeland Byrd, better known as rhythm and blues keyboard genius Professor Longhair.

For Mercurio, the problem is twofold. Galactic is a band with nowhere to tour and a business whose operating model — packing hordes of people in front of a stage for hours — doesn't work in a pandemic.

"It's terrifying," he said. "It's extremely difficult to be a now-nonworking musician owning an unopened nightclub."

Such fears aren't limited to New Orleans. Independent music clubs all over the nation — pop culture icons like the Troubadour in West Hollywood; the Bluebird Cafe in Nashville, Tennessee; The Bitter End in New York's Greenwich Village — are shuttered. And owners fear for the future of their businesses and of a musical way of life.

"There's no amount of history or legendary status that will protect you," Audrey Fix Schaefer said. She is a spokesperson for the National Independent Venue Association, which was formed in the wake of the pandemic to raise awareness and money for the newly struggling clubs. She points to the iconic jazz club Birdland in New York City. "Can you imagine having the type of rents that you have in midtown Manhattan and no revenue?"

NIVA, which has 2,800 members representing venues, promoters and festivals, lobbied for congressional passage of what the organization calls the Save Our Stages Act. The aid package, Schaefer said, has bipartisan backing and was included in a $2.2 trillion relief plan passed earlier this year in the Democrat-controlled House, and in a smaller relief package in the Republican-controlled Senate. But with no imminent resolution of differences on the overall package between the chambers, there is no clear end in sight to the pandemic closures.

"The rent is the rent, and that's the problem," says Chris Cobb, owner of Nashville's Exit/In. He said fixed costs haven't come down much at the nearly 50-year-old venue, while revenue is down 94%. Fundraising efforts, such as those by Nashville's Music Venue Alliance, and the possibility of more federal help are keeping him hopeful that they can buy themselves a few more months.

Some venues are turning to livestreaming to help themselves and create work for musicians left jobless by the pandemic. The Maple Leaf Bar, a fixture in New Orleans' Carrollton neighborhood since the 1970s, recently kicked off a series of streaming concerts dubbed "The Viral Sessions," with Jon Cleary and his band.

"It keeps musicians employed," owner Hank Staples said. "It keeps our brand out there and we've made some much needed income off of it as well."

But even with that income — minus the expenses of mounting the productions —Staples isn't sure how long he can keep The Maple Leaf going.

"We can certainly go for another month and a half or two months," Staples said recently as he sat on the Leaf's narrow stage, decorated with strings of tiny blue lights, vinyl records repurposed as wall hangings and a cardboard cutout of a nearly naked James Booker, the flamboyant piano prodigy who performed there regularly until his death in 1983. "But we need some way to generate income because the money I've squirreled away — it's depleted severely."

It's already too late for some clubs. U Street Music Hall in Washington closed for good on Oct. 5, Schaefer noted.

Club owners said in an online post that they'd hoped they could save the decade-old venue. "But due to the pandemic, mounting operational costs that never paused even while we were closed, and no clear timeline for when clubs like ours can safely reopen, we had no choice recently but to make this heartbreaking decision."

Cobb fears too many such closures would mean loss of something irretrievable in his beloved Nashville and elsewhere.

In New York, The Bitter End owner Paul Rizzo agrees. "Stephanie Germanotta, when she played at The Bitter End, wasn't Lady Gaga yet," says Rizzo. "She had to play for a while. You have to get experiences to become something that you are able to become."