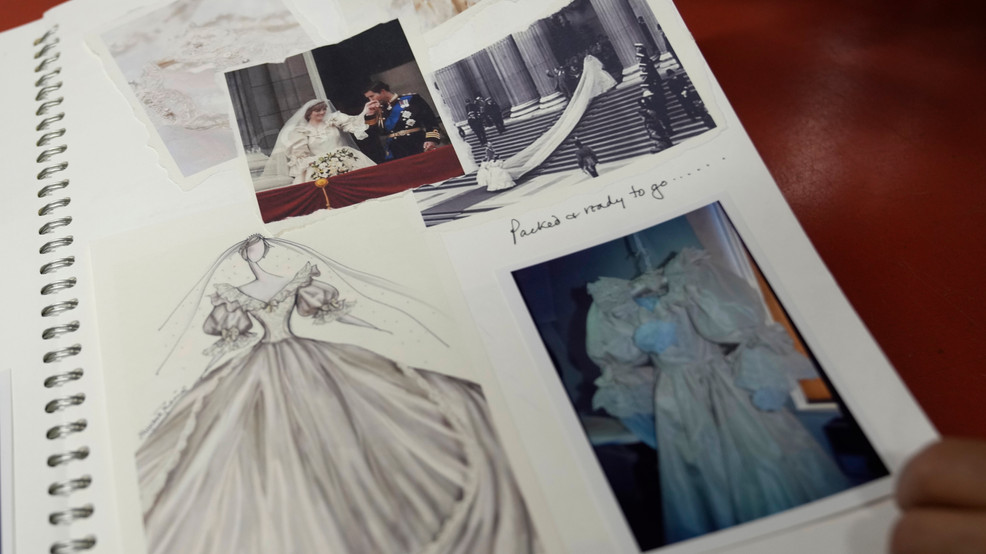 A scrap book kept by Elizabeth Emanuel, who designed Diana, Princess of Wales wedding dress, is seen at her studio during an interview with the Associated Press in Maida Vale, London, Monday, Aug. 22, 2022. (AP Photo/Alastair Grant)

Elizabeth Emanuel cradles the massive scrapbook across her chest before laying it gently on the table and opening its Prussian blue covers to reveal a personal time capsule of her relationship with Princess Diana.

Emanuel got to know Diana during the months she and her then-husband, David, spent designing the future princess’ wedding dress. Four decades later, there's a sense of intimacy as she leafs through sketches, fabric swatches and photos of Diana, displayed alongside images of the designer’s mother stitching embroidery into the gown. It’s like looking at a family album.

That sense of connection helps Emanuel understand why Diana’s death in a Paris car crash 25 years ago next Wednesday — Aug. 31, 1997 — resonated with so many people around the world.

I think people just felt she was like family, that she cared,” Emanuel told The Associated Press. “They felt close to her because you knew every detail of her life. It was in all the press, all the time. And there was all these things going on. And you felt, you know, very much part of her life in a way. And so when her life was snatched away, it was this big void. It was like a light being snuffed out.”

But for Emanuel, Diana wasn’t just the icon who appeared every day on TV screens and the front pages of newspapers. She was a real person who played a central role in her life and career.

The scrapbook documents that story — the story of a designer and a princess-to-be.

The tale begins with a pale pink blouse the Emanuels sent to British Vogue for a photo shoot on emerging beauties. Although they didn’t know it, the beauty destined to wear the blouse was Lady Diana Spencer, who would soon be engaged to Prince Charles, the heir to the British throne.

Diana liked the blouse so much that she asked who the designers were — then she called them. Emanuel answered the phone and made the appointment, but didn’t get her name.

So, she was shocked when Diana showed up at her door. By then, the engagement had been announced and Diana was famous.

But she didn’t act like it. Emanuel remembers her wearing a little sweater and skirt and perhaps a string of pearls.

She was so young and just so sweet and shy, and it was really fun,’’ said Emanuel, who was only a few years older than Diana. “It was a big adventure for her suddenly to see all the clothes in the showroom. And she put a lot of trust in us, really, to come up with clothes that would suit her. And for us, I mean, wow, it was just so fabulous to meet her.”