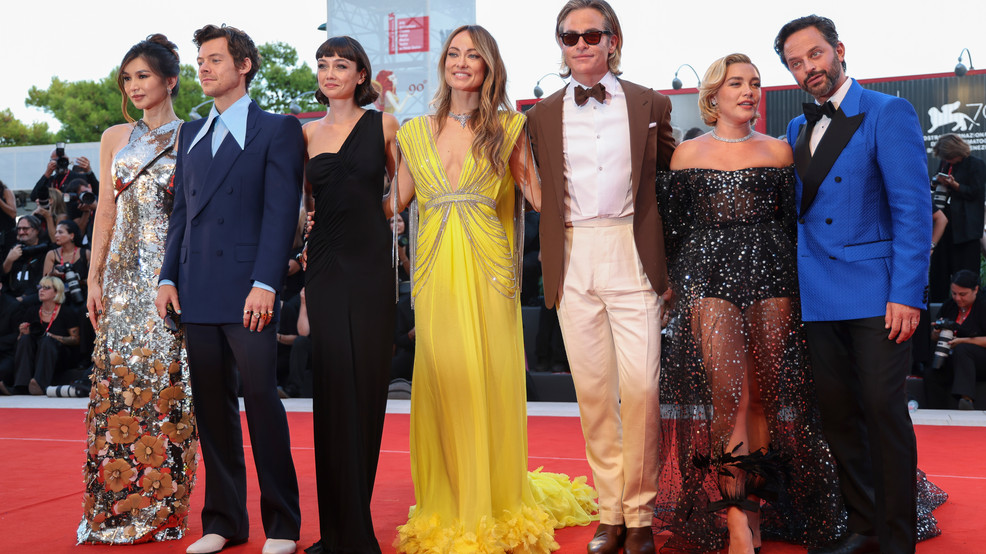 The Venice Film Festival is buzzing with anticipation for Olivia Wilde's "Don't Worry Darling," which is having its world premiere Monday night on the Lido.

By 8 a.m. Monday, dozens of Harry Styles fans were camping out in front of the theater where the premiere was held that evening and excitement was high for the arrival of the pop star whose otherworldly fame and following may make the Timothée Chalamet mania seen on Friday seem downright quaint.

By the time the premiere was over, audiences took to their feet, giving "Don't Worry Darling" a five-minute ovation. Yet premiere day did little to tamp down intrigue about the film and its stars.

Many keyed in on the film's press conference, with hopes that reports about behind-the-scenes tension with star Florence Pugh would be addressed or clarified. Wilde, before the premiere, said she didn't want to contribute to "the endless tabloid gossip" and "the noise."

"The internet feeds itself," Wilde said. "I don't need to contribute, I think it's significantly well-nourished."

Pugh is in the middle of production on "Dune 2," a massive blockbuster (also a Warner Bros. joint) and is expected to go straight back after her Venice obligations. Though the star of the film, she did not attend the press conference as her flight had not yet landed.

"Florence is a force and we are so grateful that she is able to make it tonight," Wilde said. "I know as a director how disruptive it is to lose an actor even for a day,"

Behind-the-scenes drama rarely extends beyond internal industry gossip, but the question of exactly what happened in the making of "Don't Worry Darling" has become a source of global intrigue. Lack of clarity about everything from Shia LaBeouf's departure from the film early on, to Pugh's perceived lack of public support for the project on her social media accounts have been simmering on TikTok and Twitter for some time and then furthered by a report in the Hollywood newsletter Puck, citing various anonymous studio and production sources.

Wilde, for her part, has been nothing but effusive about her lead actor. In an interview with The Associated Press she spoke at length an about Pugh's extraordinary talent saying that what she did with the role was "singularly brilliant" and that the character of Alice is a "heroine for the ages."

Still, questions remain about why Pugh has not been posting much about the film on her Instagram. She didn't hype the trailer, or say anything about getting into Venice.

It is worth noting that Pugh's "Dune 2" co-star Chalamet, had a similarly brief stay in Venice for his film "Bones and All." It's likely to be the only appearance he'll make on behalf of that film, but no one wrote any headlines about Chalamet "limiting" his press engagements

Wilde herself also became a tabloid fixture after paparazzi caught on to her off screen relationship with Styles. And then there was the CinemaCon moment, in which Wilde was served custody papers by her ex, Jason Sudeikis, during a presentation about her movie on stage in front of thousands of industry professionals and theater owners.

Then in the past few weeks, all the little threads seemed to catch fire at once. Much of that was stoked by LaBeouf, who came out of the woodwork to contest a two-year-old narrative that he'd been fired from the project. Ultimately, his role went to Styles.

Wilde, in a Variety cover story, is not directly quoted saying she fired him. She did offer: "His process was not conducive to the ethos that I demand in my productions. He has a process that, in some ways, seems to require a combative energy, and I don't personally believe that is conducive to the best performances."

In response, LaBeouf sent private emails, texts and video messages to Variety to prove his case that he actually quit due to lack of rehearsal time. The video message, in which she tries to convince LaBeouf to stay on as Jack, was subsequently leaked online in which calls Pugh "Miss Flo."

The moderator of the press conference cut off a reporter attempting to ask about LaBeouf, saying that Wilde had already answered that in her comment about "tabloid gossip" and noise.

LaBeouf, who is heading to court next year on abuse allegations from his ex, FKA twigs, happens to also be in Venice this year with the film "Padre Pio."

The press conference stuck to the themes of the film, a mid-century styled psychological thriller about a picture-perfect couple Alice (Pugh) and her husband Jack (Styles) who live in an experimental community in the desert.

"We were really interested in the kind of problematic nature of nostalgia itself," Wilde said. "In this film everything is a metaphor...everything that is beautiful is also sinister. That is by design."

The film is playing out of competition at the festival in the lead up to its Sept. 23 theatrical release.

For more on the Venice Film Festival, visit: www.apnews.com/VeniceFilmFestival