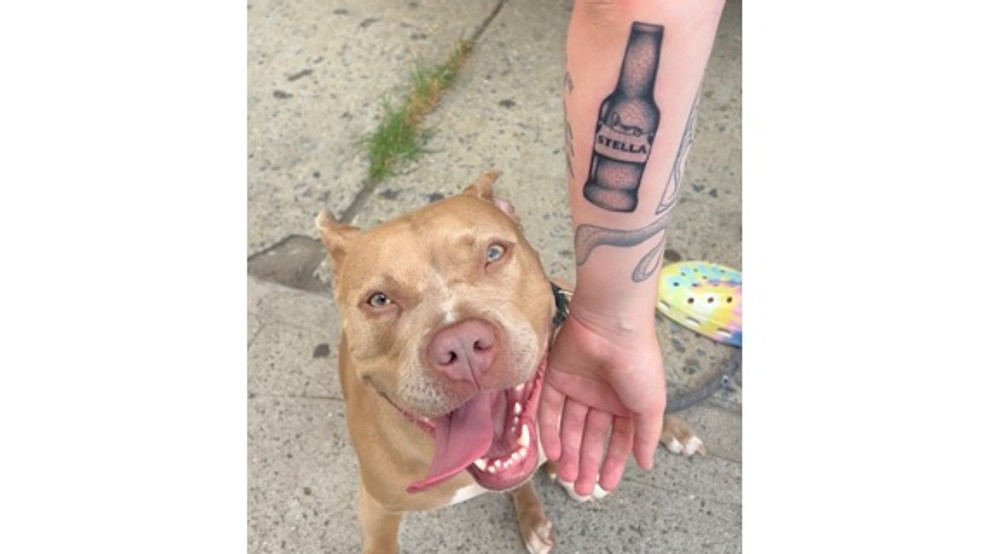 Stella, a 3-year-old pit bull, gets a look at a tattoo, which Lauren Diener got in her honor. (Image courtesy of BARK)

A company that caters to dogs is paying people $150 to get tattoos of their four-legged friends as part of a nationwide contest.

Lauren Diener, who works as a social media and content manager at BARK, loves her dog, Stella, a 3-year-old pit bull.

Diener recently got a drawing of Stella’s ears inked on her arm. She showed a few co-workers, including her boss, Stacie Grisson, and the idea for the contest was born.

She was so stoked about it that she got BARK to pay for my tattoo,” Diener told The National Desk, also noting that their colleague, Eliza Reinhardt, suggested they incorporate tattoos into the promotion.

“A conversation we had in a passing moment turned into this huge thing,” Diener added. “That was really cool.”

Tails are wagging for the contest. It launched on Aug. 17 and runs through Sept. 2, just in time for National Dog Day, which is Friday.

One-hundred winners will be able to pick their shop/tattoo artist and BARK will reimburse the cost with a $150 Visa gift card.

In good faith, we hope you use it for tattoos of dogs,” Diener said. “It can be any style of tattoo.”

The rules are listed online, with participants asked to “share a photo of your best bud and tell us why you want 'em forever on your bod.”

BARK also wants a written description that includes the dog’s name, their breed or mix, and their social media handles, if available.

The “most dog-obsessed humans on the BARK payroll” will be judges, with winners also receiving a box of BARK products chosen just for them. Plus, the first 1,000 entries will get a $5 gift card to spend at BarkShop.

Diener said she’s excited about the contest -- and so are the members of her team.

It turns out that a large percentage of people who work here have tattoos of their dogs,” she said. “We put it out on Facebook, asking for people to send us their pictures and we’ve gotten so many responses. We didn’t realize how many people were interested in this or had tattoos of their dogs.”

Diener said she has at least 18 tattoos, including the one of Stella, which she got about two weeks ago at Citizen Ink in Brooklyn. It features the dog’s ears on a Stella Artois bottle.

“She has one ear up and one ear down,” Diener said. “I have a friend who’s an artist and I was like, ‘Would you mind drawing this for me?’ And she was like, ‘For sure.’ That’s kind of how it happened. I wanted a way to commemorate her.”

Diener and her girlfriend, Rachel Crook, adopted Stella about a year ago. The pup was rescued during a hurricane in Georgia.

While Stella is afraid of the rain, she enjoys going for car rides and hopping on the subway in New York with her loved ones.

She’s like a human child,” Diener said. “She always wants to know what you’re doing and be involved in everything. She’s so cuddly. I wake up in the morning and she’s nuzzled into me.”

Diener also said she brings Stella to work with her, adding that the pooch is a bit hit at the office.

“It’s been incredible,” Diener said. “She gets all the free toys she wants, and the people are awesome.”

BARK, which is headquartered in New York and Ohio, was founded in 2012, and offers toys, treats, dental care products, and more. Emma Maliszewski, who is a spokeswoman, said while many brands that are doing tattoo promotions, BARK’s is particularly special.

We’re really giving people the creative freedom to pick the artist that they want, the style that they want, and get a tattoo that reflects the love that they have for their dog,” she said. “I’ve seen so many different ideas, whether it be initials or a portrait and it’s sparking a lot of creativity and I think that’s something we’re really excited about with this program.”