In video, Will Smith apologizes to Chris Rock for slapping him across the face 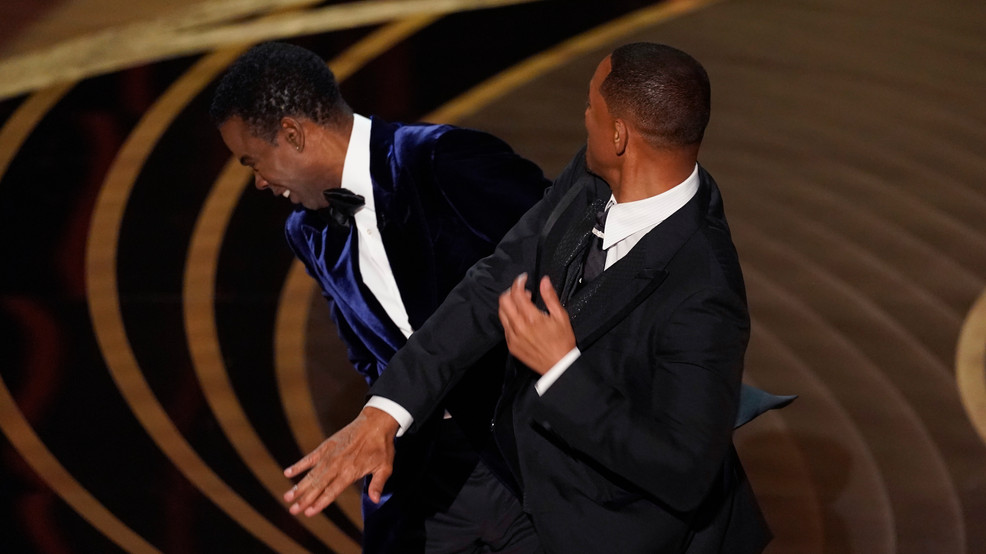 FILE - Will Smith, right, hits presenter Chris Rock on stage at the Oscars in Los Angeles on March 27, 2022, after Rock made a joke about his wife. Pinkett Smith turned her husband’s Oscar-night blowup into a teachable moment on “Red Table Talk,” her Facebook Watch show on June 1. (AP Photo/Chris Pizzello, File)

Will Smith has apologized to fellow actor and comedian Chris Rock several months after Smith slapped Rock across the face on stage at the 94th Academy Awards after Rock made a joke about Smith's wife, Jada Pinkett Smith.

The joke was about Pinkett Smith's hair, as the actress has alopecia, which is an autoimmune condition characterized by rapid hair loss in the scalp, eyebrows, and eyelashes.

In a video posted to Smith's YouTube account, as well as his social media pages, Smith addressed Rock directly.

So, I will say to you, Chris, I apologize to you," Smith said in the video, which was posted on Friday. "My behavior was unacceptable and I'm here whenever you're ready to talk."

Smith also apologized to Rock's family, including his mother, Rose Rock, saying he saw an interview she did and wanted her to know he is sorry.

"I wasn't thinking how many people got hurt in that moment," Smith said.

The altercation occurred during the awards ceremony in March.

Smith won the Oscar for Best Actor for his portrayal of tennis father Richard Williams in "King Richard".

Since then, Smith said he has been doing "a lot of thinking and personal work" and realizes what he did was inappropriate.

He added that he reached out to Rock but was told that Rock is not ready to talk, but when he is, he will contact Smith.

Smith went on to answer questions posed by fans, with many people wondering if Jada asked him to retaliate. He said that was not the case.

It's like, you know, I made a choice on my own, from my own experiences, from my history with Chris," Smith said. "Jada had nothing to do with it. I'm sorry, babe."

He also apologized to his loved ones, as well as acknowledged other actors who were nominated.

"I'm so sorry to my kids and my family for the heat that I brought on all of us," he said. "To all my fellow nominees, you know, this is a community. It's like, I won because you voted for me. And it really breaks my heart to have stolen and tarnished your moment. I can still see Questlove's eyes. You know, it happened on Questlove's award. And, you, know it's like, 'I'm sorry,' really isn't sufficient."

Smith addressed fans, as well. He said he feels awful that he disappointed people.

"I hate when I let people down," he said. "So it, it hurts. It hurts me psychologically and emotionally to know I didn't live up to people's image and impression of me and the work I'm trying to do is — I am deeply remorseful and I'm trying to be remorseful without being ashamed of myself. Right, I'm human and I made a mistake and I'm trying not to think of myself as a piece of s***."

Smith ended the video by promising everyone that he is "deeply devoted and committed to putting light and live and joy into the world. And, you know, if you hang on, I promise we'll be able to be friends again."

Smith previously apologized for his actions in an Instagram post. He shared his emotions the day after the event.

"I would like to publicly apologize to you, Chris," Smith wrote. "I was out of line and I was wrong. I am embarrassed and my actions were not indicative of the man I want to be. There is no place for violence in a world of love and kindness."