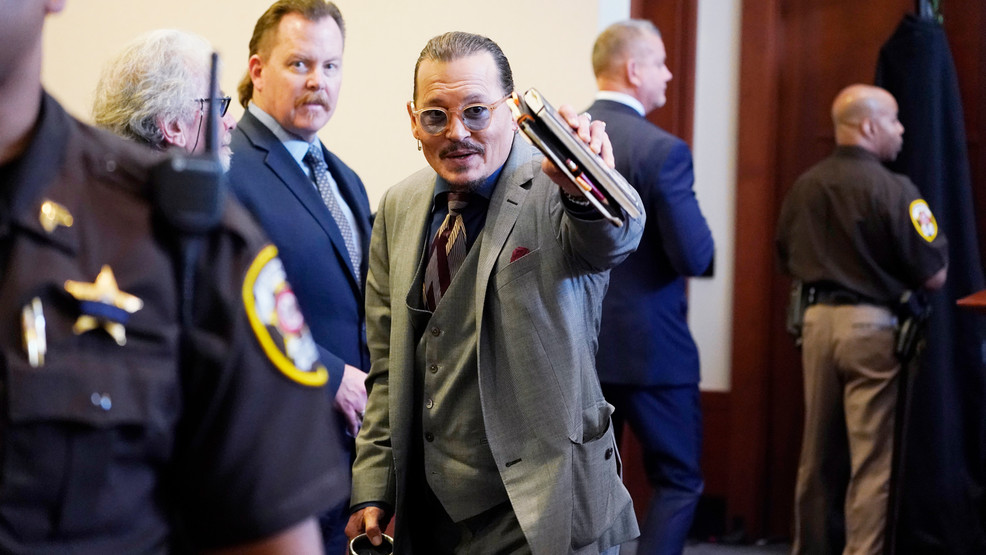 Actor Johnny Depp looks toward the courtroom gallery as they take a break in the courtroom at the Fairfax County Circuit Courthouse in Fairfax, Va., Monday, May 16, 2022. (AP Photo/Steve Helber, Pool)

Actor Johnny Depp is warning fans there are “fake" social media accounts "pretending to be me or people working with me.”

Depp shared the news – and what he described as a PSA – Sunday.

I do not have any private or side accounts on any platforms,” he wrote on Instagram and Facebook.

Depp also said he has four social media accounts, including one for Instagram, another for TikTok, as well as Facebook, and Discord.

He noted that his handles for Instagram, TikTok, and Facebook are @JohnnyDepp, while his handle for Discord is @JohnnyDepp0854.

I ask that you remain cautious as it seems these fake accounts can be relentless,” Depp wrote. “My team is working to combat the problem. Thank you for your continued support and for making me aware of this issue!”

Depp shared the post nearly three weeks after a seven-member jury handed down a verdict in Depp’s defamation case against his ex-wife, Amber Heard.

The "Pirates of the Caribbean" actor was awarded $15 million in damages, while Heard was awarded $2 million by the jury, who said Heard was defamed by Depp’s lawyer when he called her abuse allegations a hoax.

Depp shared his emotions on Instagram just moments after the verdict was announced.

Six years ago, my life, the life of my children, the lives of those closest to me, and also, the lives of the people, who for many, many years have supported and believed in me were forever changed," Depp wrote. "All in the blink of an eye. False, very serious and criminal allegations were levied at me via the media, which triggered an endless barrage of hateful content, although no charges were ever brought against me. It had already traveled around the world twice within a nanosecond and it had a seismic impact on my life and my career.

And six years later, the jury gave me my life back. I am truly humbled. My decision to pursue this case, knowing very well the height of the legal hurdles that I would be facing and the inevitable, worldwide spectacle into my life, was only made after considerable thought.

From the very beginning, the goal of bringing this case was to reveal the truth, regardless of the outcome. Speaking the truth was something that I owed to my children and to all those who have remained steadfast in their support of me. I feel at peace knowing I have finally accomplished that."

Most recently, Depp, who is also a musician, embarked on a tour with guitarist Jeff Beck. The two plan to release an album of mostly cover songs in July.

Meanwhile, Depp shared a TikTok post on June 7, expressing his gratitude to fans for their unwavering support.

"To all of my most treasured, loyal and unwavering supporters. We’ve been everywhere together, we have seen everything together," he wrote on TikTok. "We have walked the same road together. We did the right thing together, all because you cared. And now, we will all move forward together. You are, as always, my employers and once again I am whittled down to no way to say thank you, other than just by saying thank you. So, thank you. My love & respect, JD."