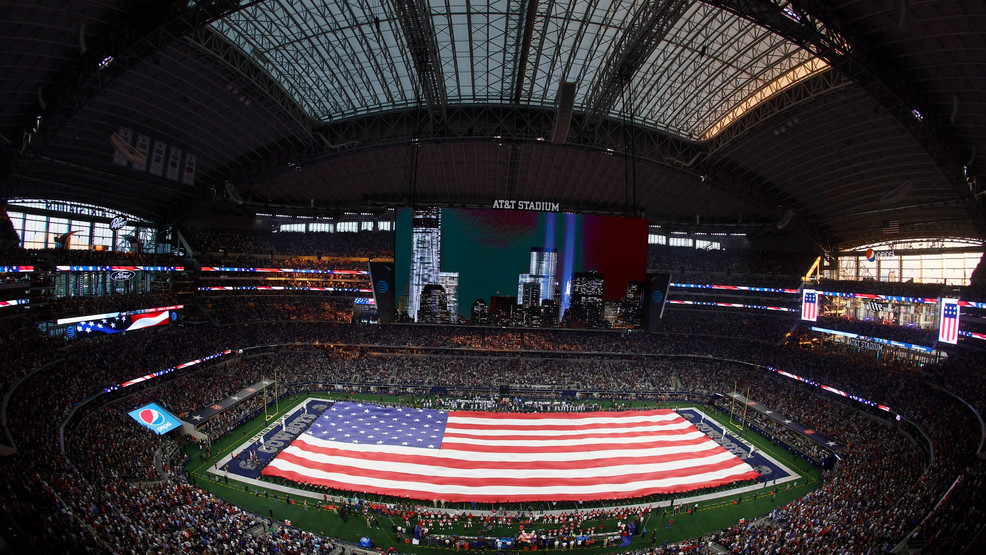 A view of the New York skyline with a tribute to Sept. 11, is shown on the large video screen during the playing of the national anthem before the first half of a NFL football game between the Tampa Bay Buccaneers and Dallas Cowboys in Arlington, Texas, Sunday, Sept. 11, 2022. (AP Photo/Brandon Wade)

More than 121 million fans watched a telecast of an NFL game during the league's opening week, a 5% increase over last season.

The league and Nielsen also said on Wednesday that the average viewership for all games was 18.5 million, the best opening weekend in six years and up 3% from last year.

A record seven Week 1 games were decided by three points or fewer and five came down to a game-winning score either in the final two minutes of regulation or overtime.

Russell Wilson's return to Seattle and the Seahawks' 17-16 narrow victory over Denver averaged 19.8 million across ABC, ESPN and ESPN2. That is the most-watched Monday night game since New Orleans faced New England in 2009 (21.4 million). It's also the fourth-biggest audience since ESPN took over "Monday Night Football" in 2006.

Minnesota's 23-7 win over Green Bay averaged 18.5 million on Fox, and was the most-viewed during the late Sunday afternoon window. Fox's doubleheader numbers were up 11% over last season, with an average of 15.4 million for its six games.

CBS had the most-watched early game, with Pittsburgh's 23-20 overtime victory at Cincinnati averaging 17.5 million. CBS had seven games on Sunday and its doubleheader averaged 17.0 million, the network's third-most watched Week 1 since 1998.