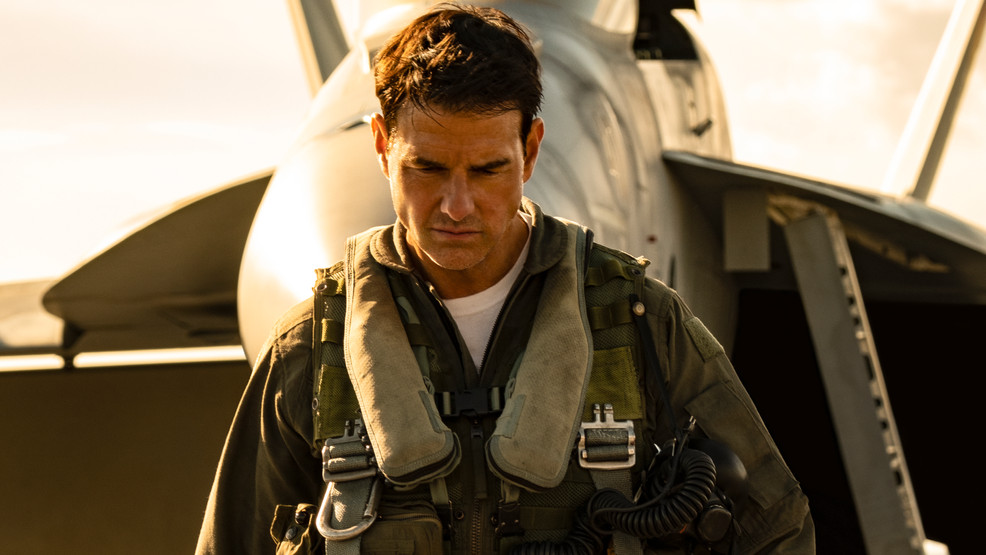 The year's biggest film is now available to own digitally. But you should still go see "Top Gun: Maverick" on the biggest screen possible while it is still in theaters. That's not your only option as "DC League of Super-Pets" also makes it way to your favorite digital retailers and for those who don't have an HBO Max subscription the Andy Garcia starring remake of "Father of the Bride" is now a viable option.

Those looking for something outside of the mainstream have a variety of indie options including numerous Ukrainian films that give context and perspective to the Russian invasion. Elsewhere is a tribute of sorts to Jean-Luc Godard and a horror comedy.

On the physical side of the coin, anime hit "My Hero Academia: World Heroes' Mission" and the romantic period piece "Mr. Malcolm's List" are the clear headliners. However, I'd like to direct your attention to the odd double feature that would be The Criterion Collection's release of "Hotel Du Nord," and Shout! Factory's 4K release of "Dog Soldiers." A slightly more traditional pairing would be the DC series "Naomi" and Sidney Poitier's "Buck and Preacher." "Those looking for a Western with a bit of murder intrigue might want to consider "Murder at Yellowstone City. "FernGully: The Last Rainforest" gets a 30th Anniversary Edition and the sci-fi series "StarHunter" gets a reworking with newly shot scenes and upgraded effects.

Studio Synopsis: After more than thirty years of service as a top naval aviator, Pete “Maverick” Mitchell (Tom Cruise) is where he belongs, pushing the envelope as a courageous test pilot. Yet, Maverick must confront the ghosts of his past when he returns to TOPGUN to train a group of elite graduates and comes face to face with Lt. Bradshaw (Miles Teller), the son of his former wingman "Goose". Bitter rivalries ignite as the pilots prepare for a specialized mission which will require the ultimate sacrifice from those chosen to fly it. (Blu-ray and DVD available November 1, 2022)

Studio Synopsis: Krypto the SuperDog (Dwayne Johnson) and Superman (John Krasinski) are inseparable best friends, sharing the same superpowers and fighting crime in Metropolis side by side. When Superman and the rest of the Justice League are kidnapped, Krypto must convince a ragtag shelter pack—Ace the hound (Kevin Hart), PB the potbellied pig (Vanessa Bayer), Merton the turtle (Natasha Lyonne) and Chip the squirrel (Diego Luna)—to master their own newfound powers and help him rescue the superheroes. (Blu-ray and DVD available October 4, 2022)

Studio Synopsis: Billy (Andy Garcia) and Ingrid (Gloria Estefan) are surprised when their eldest daughter Sofia (Adria Arjona) comes home to Miami for a visit, announcing a new boyfriend, Adan (Diego Boneta)—who is now her fiancé—and their plans for a wedding and a new life together in Mexico. Family relationships are tested as the roller coaster ride of wedding planning races toward the altar. This sparkling story of a modern rom-com updated from a timeless classic illustrates the surprising and funny ways the heart can adapt in the name of love.

Studio Synopsis: A queer, coming-of-age drama about an anxious teen girl (Madeline DeFreece) who is manipulated into a romantic encounter with her best friend (Rachel Sennott). (Also available on DVD)

Studio Synopsis: In a small, conservative Indian village, the pornography addiction of an old man, Ananda, and his friends is upturned when he accidentally brings home a DVD of a Jean-Luc Godard film. (Also available on DVD)

The Day After Halloween

Studio Synopsis: It’s The Hangover meets Horror when Gravitas Ventures and Kamikaze Dogfight invite you to witness The Day after Halloween. Directed by Chad Ostrom, and written by Danny Schluck, this frighteningly fun genre treat sees two lifelong buddies forced to unravel the circumstances that led to a corpse in their bathtub in the wake of a Halloween party!

Studio Synopsis: In 2014, Ukrainian surgeon Serhiy enlists to fight Russian military forces in the Donbass region, where he is captured by enemy soldiers. Now a prisoner of war, Serhiy is forced to witness horrifying scenes of humiliation and violence at the hands of the Russian invaders, his medical background co-opted to dispense mercy killings to the tortured. After his release, he returns to his comfortable middle-class apartment, still suffering from the trauma of his experiences. Looking inward, Serhiy tries to find a purpose in life by rebuilding his relationship with his daughter and ex-wife, learning how to be a human being again through being a father. Written, directed, produced, shot, and edited by acclaimed Ukrainian filmmaker Valentyn Vasyanovych, REFLECTION is a meticulously-composed depiction of pain - and redemption - that Variety called "one of the most intellectually provocative and rewarding films" of the 2021 Venice Film Festival. (Also available on DVD)

Studio Synopsis: In the Donbass region of Eastern Ukraine, mid-2010s: a hybrid war takes place, involving an open armed conflict alongside killings and robberies on a mass scale perpetrated by Russian-separatist gangs. In the Donbass, war is called peace, propaganda is uttered as truth, and hatred is declared to be love. Life is suffused with fear and suspicion. What is real and what is fake news? Called "a darkly satirical omnibus of scathing vignettes" by the Washington Post, DONBASS serves as a crucial interpretation of the Russo-Ukrainian war, but the film is not, ultimately, a tale of one region or one conflict. It is about a world lost in post-truth and fake identities. It is about each and every one of us. (Also available on DVD)

The Earth is Blue as an Orange

Studio Synopsis: To cope with the daily trauma of living in a war-zone, Anna and her children make a film together about their life in the most surreal surroundings. Winner of the Directing Award for World Cinema Documentary at the 2020 Sundance Film Festival, THE EARTH IS AS BLUE AS AN ORANGE stands not only as a remarkable document of the Russo-Ukrainian War through the lens - literally - of this family's creative process, but as an optimistic testament to the power of art and beauty in the face of destruction. (Also available on DVD)

Studio Synopsis: Four short stories are set along the treacherous roads of Donbas, Ukraine during the war. Originally presented on stage at the Royal Court Theater in London and adapted powerfully by writer/director Natalya Vorozhbit, BAD ROADS presents a series of tension-packed vignettes, each built around a dangerous encounter on the byways of Eastern Ukraine. With a particular sensitivity to the vulnerability of women during wartime, Vorozhbit's debut feature, was Ukraine's official submission to the 2022 Academy Awards. (Also available on DVD)

Studio Synopsis: When a sinister organization threatens to end superhuman powers, Deku, Bakugo, and Todoroki have two hours to stop civilization’s collapse. But there’s still one problem: Deku’s on the run for murder.

Studio Synopsis: Starring Kaci Walfall (“Army Wives,” “Power,” “The Lion King” on Broadway) in the title role, the DC drama NAOMI follows the journey of a cool, confident, comic book–loving teenager as she pursues her hidden destiny. When a supernatural event shakes her hometown of Port Oswego to the core, Naomi sets out to uncover its origins, with a little help from her fiercely loyal best friend Annabelle (Mary-Charles Jones, “Kevin Can Wait”).

Studio Synopsis: When she fails to meet an item on his list of requirements for a bride, Julia Thistlewaite (Zawe Ashton) is jilted by London’s most eligible bachelor, Mr. Malcolm (Ṣọpẹ́ Dìrísù). Feeling humiliated and determined to exact revenge, she convinces her friend Selina Dalton (Freida Pinto) to play the role of his ideal match. Soon, Mr. Malcolm wonders whether he’s found the perfect woman...or the perfect hoax.

Studio Synopsis: The once peaceful and booming Yellowstone City has fallen on hard times, but when a local prospector strikes gold, things seem to be turning around. Any hope is soon shattered when the prospector is found dead and the Sheriff quickly arrests a mysterious newcomer. But nothing is so simple in this sleepy western town, and more than a few of the locals have secrets to keep and reasons to kill. As the brutal murders continue, pitting neighbor against neighbor, Yellowstone City goes down a bloody path to a final showdown that not all will survive.

Studio Synopsis: Celebrate thirty years of magic in FernGully: The Last Rainforest, now looking better than ever with a brilliant master created from a brand-new 4K scan and restoration of the original film elements! Deep in the heart of the forest awaits a paradise filled with tiny sprites, winged fairies, tree spirits, and all kinds of animals who live together in joyful harmony. But when their home is threatened by humans, one courageous sprite must give her all to save it!

Studio Synopsis: Anguished young lovers, fallen women, wanted criminals, and all manner of social castoffs: these are the disreputable denizens of the Hôtel du Nord, an atmospherically seedy boardinghouse on the bustling banks of the Canal Saint-Martin in Paris, whose lives collide in Marcel Carné’s bittersweet rhapsody of romance, betrayal, revelry, and violence. Featuring evocative production design by the famed Alexandre Trauner and a colorful ensemble cast of some of classical French cinema’s most illustrious stars—including Annabella, Louis Jouvet, and a divinely dissolute Arletty in one of her most iconic roles—Hôtel du Nord is a jewel of a film and a sublime exemplar of Carné’s celebrated poetics, imbuing working-class lives and dramas with a touching nobility.

Buck and the Preacher

Studio Synopsis: With his rousingly entertaining directorial debut, Sidney Poitier, alongside actor-producer Harry Belafonte, helped rewrite the history of the western, bringing Black heroes to a genre in which they had always been sorely underrepresented. Combining boisterous buddy comedy with blistering, Black Power–era political fury, Poitier and a marvelously mischievous Belafonte star as a tough and taciturn wagon master and an unscrupulous, pistol-packing “preacher,” who join forces in order to take on the white bounty hunters threatening a westward-bound caravan of people recently emancipated from slavery. A superbly crafted revisionist landmark, Buck and the Preacher subverts Hollywood conventions at every turn and reclaims the western genre in the name of Black liberation.

Studio Synopsis: Two titans of French Cinema, Simone Signoret and Alain Delon, are brought together for this crime drama set in the snow-covered French countryside on the border with Switzerland.

Studio Synopsis: A group of soldiers dispatched to the Scottish Highlands on special training maneuvers face their biggest fears after they run into Captain Ryan – the only survivor of a Special Ops team that was literally torn to pieces. Ryan refuses to disclose his mission even though whoever attacked his men might be hungry for seconds. Help arrives in the form of a local woman who shelters them in a deserted farmhouse deep in the forest ... but when they realize that they are surrounded by a pack of blood-lusting werewolves, it's apparent their nightmare has just begun!

Welcome to the year 2275. Earth has colonized the entire solar system ... but danger still lurks in every corner of the universe. Bounty hunter Dante Montana (Paré) and his crew travel among the stars on the trail of interplanetary criminals, including the Raiders – an evil cabal that Dante believes kidnapped his beloved son. Elsewhere, covert forces wage a desperate war to unlock the secrets of the mysterious Divinity Cluster, believed to hold powerful knowledge that in the wrong hands would offer the power to dominate the known universe.