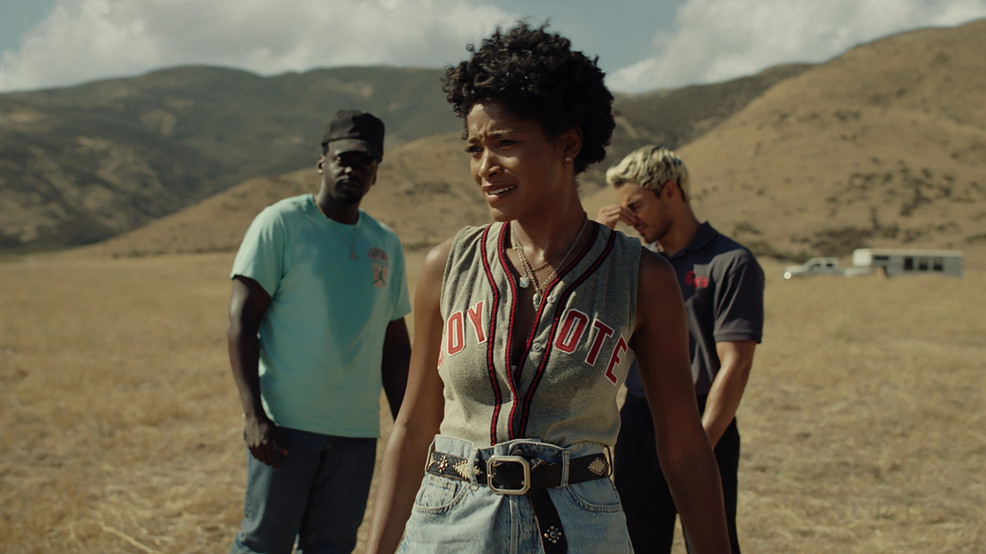 This week's biggest digital release is Jordan Peel's "Nope," a science fiction film that squeezes in some horror elements to tell the story of OJ, Emerald, their horse farm, and something hiding within the clouds. Other highlights include the full DC Animated film for "Batman: The Long Halloween" and the documentary "The Story of Film: A New Generation" that looks at the groundbreaking films released between 2010 - 2021. I haven't watched it, but "Three Minutes: A Lengthening" sounds incredibly interesting.

On the physical front, a complete Aqua Teen Hunger Force collection (includes the feature film) is now available on DVD. If you haven't seen "Vengeance," that's absolutely worth a look as well. I've included my interview with writer/director/star B.J. Novak if you want to hear him talking about the film.

Studio Synopsis: Following their father’s shocking death, Hollywood animal wrangler OJ (Daniel Kaluuya) and his sister Emerald (Keke Palmer) begin observing unexplained phenomena on their vast Southern California ranch that leads them down an obsessive rabbit hole as they plot attempts to capture the mystery on camera. Along with a former child star turned family theme park ringmaster (Steven Yeun) who neighbors the siblings, the pair’s efforts to chase the spectacle soon bring terrifying consequences and unimaginable horror. The result is a complex social thriller that unpacks the seeds of violence, risk and opportunism that are inseparable from the romanticized history of the American West and from show business itself. (Available on 4k, Blu-ray and DVD Oct. 25, 2022)

Studio Synopsis: Inspired by the iconic mid-1990s DC story from Jeph Loeb and the late Tim Sale, Batman: The Long Halloween – Deluxe Edition begins as atrocious serial killings on holidays in Gotham City send The World’s Greatest Detective into action – confronting both organized crime and a unified front of classic DC Super-Villains – while attempting to stop the mysterious murderer. (Also available on 4K, Blu-ray and DVD)

The Story of Film: A New Generation

Studio Synopsis: A decade after The Story of Film: An Odyssey, an expansive and influential inquiry into the state of moviemaking in the 20th century, filmmaker Mark Cousins returns with an epic and hopeful tale of cinematic innovation from around the globe. In The Story of Film: A New Generation, Cousins turns his sharp, meticulously honed gaze on world cinema from 2010 to 2021, using a surprising range of works, including Frozen, The Babadook, and Cemetery of Splendour , as launchpads to explore recurring themes and emerging motifs, from the evolution of film language, to technology's role in moviemaking today, to shifting identities in 21st-century world cinema. Touching on everything from Parasite and The Farewell to Black Panther and Lovers Rock, Cousins seeks out films, filmmakers and communities under-represented in traditional film histories, with a particular emphasis on Asian and Middle Eastern works, as well as boundary-pushing documentaries and films that see gender in new ways. And as the recent pandemic recedes, Cousins ponders what comes next in the streaming age: how have we changed as cinephiles, and how moviegoing will continue to transform in the digital century, to our collective joy and wonder. (Available on DVD Oct. 18, 2022)

Studio Synopsis: In the aftermath of a near-death experience in the final days of the First World War, former soldier Tomás has become a photographer with a particular — and peculiar — expertise. Presenting the bereaved an opportunity for one final, indelible memory of their dead loved ones, Tomás creates family photos in which the living and the dead are posed together. Haunted by a vision of an orphaned girl, Tomás is drawn to a disease-stricken village that its inhabitants claim is overrun by ghosts. With the young orphan at his side, Tomás digs deeper into the mysteries of the village — and of what lies between life and death.

Studio Synopsis: Vision plagued Father John is ousted from his parish. With nowhere to turn he follows the visions but at what price?

The Crimson Rivers 2: Angels of the Apocalypse

Studio Synopsis: Pierre Niemans (Jean Reno) investigates a series of ritual murders that are somehow tied to a secretive order of monk, hidden treasure, and the Apocalypse.

Studio Synopsis: In a remote island along Croatia’s Adriatic coast, 17-year-old Julija spends her days diving for eel with her domineering father Ante and watching other teens party on a nearby yacht. Julija bristles at Ante’s heavy handed cruelty and resents her mother Nela’s passivity. She longs for independence but is unsure how to achieve it, until the arrival of the rich and mysterious Javier seems to offer a way out. Javier is considering buying Ante’s land to build a resort, which would allow the family to escape their island isolation for the city. Once Ante’s employer and Nela’s lover, Javier flirts shamelessly with Nela and Julija, setting off a subtle battle of hypermasculine one-upmanship that pushes Ante to humiliate and control Julija even more. Flattered by Javier’s praise and stories of traveling the world, Julija sees him as the solution to all her problems. But does his affection portend freedom, or something more sinister?

Studio Synopsis: After avenging the murder of his wife and child, a former soldier (Ryan Kwanten) is sent to prison with a life sentence. He’s given a shot at freedom when a shadowy government agency recruits him for an off-the-books assignment. He soon realizes Section 8 isn’t what it seems.

Studio Synopsis: A home movie shot by David Kurtz in 1938 in a Jewish town in Poland. As long as we are watching, history is not over yet. The three minutes of footage, mostly in color, are the only moving images left of the Jewish inhabitants of Nasielsk before the Holocaust. The existing three minutes are examined to unravel the human stories hidden in the celluloid.

Studio Synopsis: Struggling addict and TV actor Dennis retreats to his remote family home with his wife Mia in a last ditch effort to detox and save their marriage. Their isolation is disrupted when Dennis’ estranged brother Roger unexpectedly arrives in the middle of their first night, pushing the couple’s commitment to each other to the limit as Roger infiltrates their relationship. As Dennis’ nightmares and actions become more disturbing, they are tasked with distinguishing reality from hallucination.

Studio Synopsis: Three unique detectives, the Aqua Teen Hunger Force, share a rental house in New Jersey. This mystery-solving trio is comprised of human-sized food products: Master Shake, the big-mouthed, self-appointed team leader with a short attention span and no work ethic; Frylock, the only reasonable member of the group, who happens to be a box of French-fried potatoes--spuds with power; and Meatwad, a talented round mound of meat who can take the shape of a hot dog or an igloo. Together, this triple threat tackles unusual cases from the luxury of a neighbor's swimming pool--unless they're confronted by danger. Then, of course, the three run like hell.

Studio Synopsis: A continuation of Claire and Jamie’s epic fight to protect those they love as they navigate the trials and tribulations of life in the New World. The series follows the Frasers as they strive to maintain peace and flourish within a colonial society which – as Claire knows all too well – is unwittingly marching toward Revolution. Against this backdrop, which heralds the birth of the new American nation, Claire and Jamie have built a home together at Fraser’s Ridge. They must now defend this home – established on land granted to them by the Crown – not only from external forces, but also from the increasing strife and conflict in the community within their care. For the Frasers and their immediate family, then, “home” is more than simply a site in which they live, it is the place they are laying the foundations for the rest of their lives.

Studio Synopsis: Cursed Films returns with a new five-episode season exploring the myths and legends behind some of Hollywood’s notoriously “cursed” horror film productions. The Wizard of Oz, Rosemary's Baby, Stalker, The Serpent and the Rainbow, Cannibal Holocaust: Were these films really cursed, as many believe, or just the victims of bad luck and bizarre circumstances?

Studio Synopsis: Vengeance, the directorial debut from writer and star B.J. Novak ("The Office"), is a darkly comic thriller about Ben, a journalist and podcaster who travels from New York City to West Texas to investigate the death of a girl he was hooking up with. With an ensemble cast that includes Issa Rae, Ashton Kutcher, and Dove Cameron.

Studio Synopsis: THE EQUALIZER is a reimagining of the classic series starring Academy Award nominee and multi-hyphenate Queen Latifah (“Chicago,” “Bessie”) as Robyn McCall, an enigmatic woman with a mysterious background who uses her extensive skills as a former CIA operative to help those with nowhere else to turn. McCall presents to most as an average single mom who is quietly raising her teenage daughter. But to a trusted few, she is The Equalizer – an anonymous guardian angel and defender of the downtrodden, who’s also dogged in her pursuit of personal redemption. Robyn’s clandestine work and her personal life collide when her smart and observant daughter, Delilah, and her aunt Vi, who lives with Robyn to help her balance life as a working mother, discover her secret career as a vigilante. While Robyn contends with uncertainty at home, she is joined in her pursuit of justice by Melody “Mel” Bayani, an edgy bar owner and sniper from Robyn’s past; and Harry Keshegian, a paranoid and brilliant white-hat hacker. As Robyn aids the oppressed and exploited, she sometimes works with Marcus Dante, an NYPD detective who once sought to uncover her identity, but now respects the need for Robyn’s type of justice even as he often questions her methods.

Studio Synopsis: One of the defining independent films of the 1990s, Atom Egoyan’s mesmerizing international breakthrough Exotica takes the conventions of the psychological thriller into bold new territory—unsettling, dreamlike, and empathetic. At the neon-drenched Toronto strip club of the film’s title, a coterie of lost and damaged souls—including a man haunted by grief, a young woman with whom he shares an enigmatic bond, an obsessive emcee, and a smuggler of rare bird eggs—search for redemption as they work through the traumas of their mysteriously interconnected histories in an obsessive cycle of sex, pain, jealousy, and catharsis. Masterfully weaving together past and present, Egoyan constructs a spellbinding narrative puzzle, the full emotional impact of which doesn’t hit until the last piece is in place.