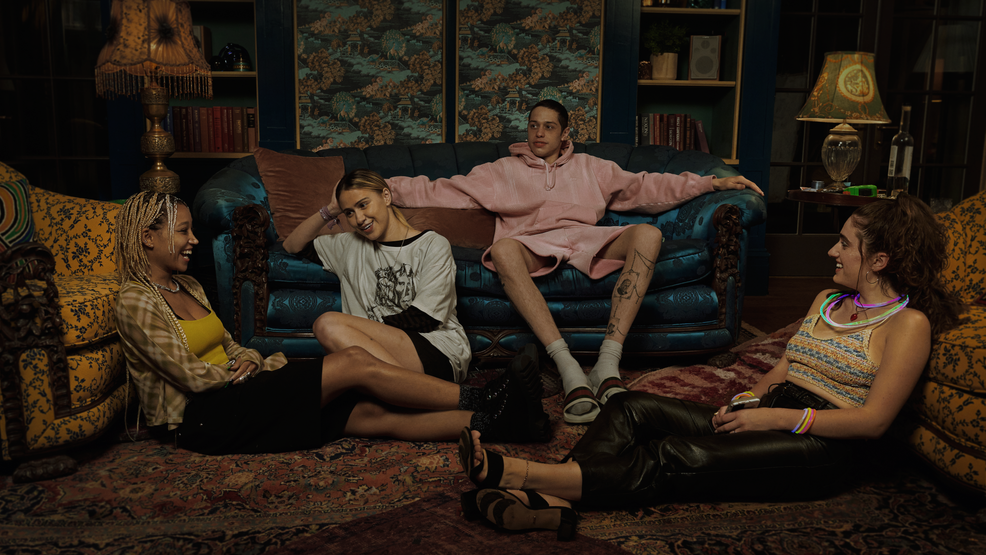 That's only the tip of the iceberg as a smattering of indie hits, critically acclaimed dramas, and horror films old and new arrive just in time for October. And "Honk for Jesus. Save Your Soul." is available to own on Oct. 2, 2022.

The week also sees "Thor: Love and Thunder" make its debut on Blu-ray and DVD along with a bevy of television series, cinema classics and the latest volume from Martin Scorsese’s World Cinema Project.

Of the smaller titles, my digital recommendations for the week are "Emily the Criminal," "The House of the Lost on the Cape," and "A Love Song." Of the physical releases, I'd suggest tracking down "The Sound of Metal," "A Fugitives from the Past," the 1951 version of "War of the Worlds," and 2013's "Evil Dead."

Studio Synopsis: When a group of rich 20-somethings get stuck at a remote family mansion during a hurricane, a party game ends with a dead body on the ground and fingers pointed everywhere. As they try to find the killer among them, fake friends and real enemies have to learn who to trust-and how to survive-in this fresh and funny Gen-Z meltdown starring Pete Davidson, Amandla Stenberg, and Maria Bakalova. (Available on Blu-ray and DVD October 18, 2022)

Studio Synopsis: In Bullet Train, Brad Pitt stars as Ladybug, an unlucky assassin determined to do his job peacefully after one too many gigs gone off the rails. Fate, however, may have other plans, as Ladybug's latest mission puts him on a collision course with lethal adversaries from around the globe – all with connected, yet conflicting, objectives – on the world's fastest train...and he's got to figure out how to get off. From the director of Deadpool 2, David Leitch, the end of the line is only the beginning in a wild, non-stop thrill ride through modern-day Japan. (Available on Blu-ray and DVD October 18, 2022)

Studio Synopsis: For best friends Becky (Grace Caroline Currey) and Hunter (Virginia Gardner), life is all about conquering fears and pushing limits. But after they climb 2,000 feet to the top of a remote, abandoned radio tower, they find themselves stranded with no way down. Now Becky and Hunter's expert climbing skills will be put to the ultimate test as they desperately fight to survive the elements, a lack of supplies, and vertigo-inducing heights in this adrenaline-fueled thriller costarring Jeffrey Dean Morgan. (Available on Blu-ray and DVD October 18, 2022)

Studio Synopsis: From writer/director Rob Zombie comes the strangest love story ever told. Lily is just your typical 150-year-old, lovelorn vampire looking for the man of her nightmares . . . that is until she lays eyes on Herman, a seven-foot-tall, green experiment with a heart of gold. It's love at first shock as these two ghouls fall fangs over feet in this crazy Transylvanian romance. Unfortunately, it's not all smooth sailing in the cemetery as Lily's father The Count has other plans for his beloved daughter's future, and they don't involve her bumbling beau Herman. You'll laugh, you'll cry, you'll howl at the moon as The Munsters make their way to Mockingbird Lane! (Also available on Blu-ray and DVD)

Honk for Jesus. Save Your Soul.

Studio Synopsis: Proud first lady of a Southern Baptist megachurch, Trinitie Childs (Regina Hall) carries immense responsibility on her shoulders. After a scandal involving her husband, Pastor Lee-Curtis Childs (Sterling K. Brown), the church is forced to close temporarily, leaving Trinitie struggling to manage the aftermath. Now Trinitie and Lee-Curtis must rebuild their congregation and reconcile their faith by all means necessary to make the biggest comeback that commodified religion has ever seen. (Digital available October 2 followed by Blu-ray and DVD November 1, 2022)

Bring it On: Cheer or Die

Studio Synopsis: When Abby and her Diablos teammates are forbidden from doing any risky cheer stunts by their overly cautious school, they fear that they will be laughed out of the upcoming regional cheer competition. The squad comes up with a plan to choreograph a winning routine in secret, at a nearby abandoned school. Once at the school to rehearse, one by one the cheerleaders begin to disappear. By the time they realize they're locked inside with a killer, it may be too late for any of them to survive. They must use their skills to fight off a killer who gives them only one choice: Cheer or die!

I Know What You Did Last Summer 3-Movie Collection

Studio Synopsis: After his son witnesses a brutal murder by a notorious crime boss, a deaf Indonesian gangster is thrust into the fight of his life when he takes on his dangerous former allies—including a sociopathic assassin—in order to protect his child. (Also available on DVD and Blu-ray)

Studio Synopsis: Marvel Studios' Thor: Love and Thunder finds the God of Thunder (Chris Hemsworth) on a journey unlike anything he's ever faced – one of self-discovery. But his efforts are interrupted by a galactic killer known as Gorr the God Butcher (Christian Bale), who seeks the extinction of the gods. To combat the threat, Thor enlists the help of King Valkyrie (Tessa Thompson), Korg (Taika Waititi) and ex-girlfriend Jane Foster (Natalie Portman), who – to Thor's surprise – inexplicably wields his magical hammer, Mjolnir, as the Mighty Thor. Together, they embark upon a harrowing cosmic adventure to uncover the mystery of the God Butcher's vengeance and stop him before it's too late.

Studio Synopsis: Established by Martin Scorsese in 2007, The Film Foundation’s World Cinema Project has maintained a fierce commitment to preserving and presenting masterpieces from around the globe, with a growing roster of dozens of restorations that have introduced moviegoers to often overlooked areas of cinema history. This collector’s set gathers six important works, from Angola (Sambizanga), Argentina (Prisioneros de la tierra), Iran (Chess of the Wind), Cameroon (Muna moto), Hungary (Two Girls on the Street), and India (Kalpana). Each title is an essential contribution to the art form and a window onto a filmmaking tradition that international audiences previously had limited opportunities to experience.

Studio Synopsis: In Sound of Metal, a tale of sound, fury, and self-discovery, Riz Ahmed delivers an intensely committed performance as the volatile Ruben, who has found new purpose as a drummer in a noise-metal duo, playing blistering live shows with his singer girlfriend, Lou (Olivia Cooke). When Ruben suddenly loses much of his hearing, he is launched on a profound odyssey—through denial, anger, grief, and, gradually, acceptance—as he comes to understand what it means to live as a deaf person and to discover deafness as not a disability but a rich culture and community. Through stunningly immersive, Academy Award–winning sound design, director Darius Marder invites us to experience the world as Ruben does, capturing a sonic spectrum in which silence comes in a thousand shades.

A Fugitive from the Past

Studio Synopsis: In 1947, a freak typhoon sends a passenger ferry running between Hokkaido and mainland Japan plunging to the ocean depths, with hundreds of lives lost. During the chaos, three men are witnessed fleeing a burning pawnshop in the Hokkaido port town of Iwanai. The police suspect theft and arson, and when Detective Yumisaka (Junzaburo Ban) discovers the burned remains of a boat and the corpses of two men, he sets about tracking the shadowy third figure. Meanwhile, the mysterious Takichi Inukai (Rentaro Mikuni) takes shelter with a prostitute, Yae (Sachiko Hidari), a brief encounter that will come to define both of their lives. A decade later, long after the trail has gone cold, Yumisaka is called back by his successor Detective Ajimura (Ken Takakura) as two new dead bodies are found.

Double Feature: War of the Worlds and When Worlds Collide

Studio Synopsis: Gene Barry (TV's Bat Masterson) and Ann Robinson (TV's Fury) are among the humans intrigued when a meteor-like object crashes to Earth ... but its occupants are definitely not friendly. The assault on Earth is underway, and the Martian machines -- hovering "swan"-shaped vehicles of destruction -- are both beautiful and terrifying as they cut a relentless path of annihilation.

I Know What You Did Last Summer 4K UHD

Studio Synopsis: Three friends accidentally hit and kill someone while they are driving drunk. They opt not to tell anyone about the murder and, in time, they pretend to forget about it. Their crime comes back to haunt them the following summer when they each start receiving mysterious letters from someone who knows what they've done.

Studio Synopsis: A secluded cabin. An ancient curse. An unrelenting evil. The original producers of The Evil Dead reunite to present a genuinely terrifying re-imagining of their horror masterpiece. Five young friends have found the mysterious and fiercely powerful Book of the Dead. Unable to resist its temptation, they release a violent demon on a bloodthirsty quest to possess them all. Who will be left to fight for their survival and defeat this unearthly force of murderous carnage?

Studio Synopsis: Six months after the explosive events of season one, Nicky and the Shens are in a great place: Nicky's been using her Kung Fu skills to keep Chinatown safe, she and Henry are only deeper in love, and the family are all in the know about Nicky's extracurricular activities. Everything's great...until the reemergence of Russell Tan and the surprise appearance of Nicky's cousin, Mia.

Studio Synopsis: Hailing from “Yellowstone” co-creator and Academy Award nominee Taylor Sheridan and Hugh Dillon, “MAYOR OF KINGSTOWN” follows the McLusky family, power brokers in Kingstown, Mich., where the business of incarceration is the only thriving industry. Tackling themes of systemic racism, corruption and inequality, the series provides a stark look at their attempt to bring order and justice to a town that has neither.

Studio Synopsis: Season two of Superman & Lois opens with the dust still settling in Smallville following the shocking outcome of last season’s confrontation between Morgan Edge and Superman. With Smallville on the national map for the first time in the town’s history, Lois Lane faces fresh challenges in her latest journalistic endeavors, while Jordan and Jonathan also find themselves dealing with change.

Studio Synopsis: A social satire set at an exclusive tropical resort, this series follows the exploits of various guests and employees over the span of one week. Checking into the luxurious White Lotus are a group of vacationers who run roughshod over the resort manager and head of spa services. As darker dynamics emerge with each passing day, this biting six-episode series gradually reveals the complex truths of the seemingly picture-perfect travelers, cheerful hotel employees, and idyllic locale itself.