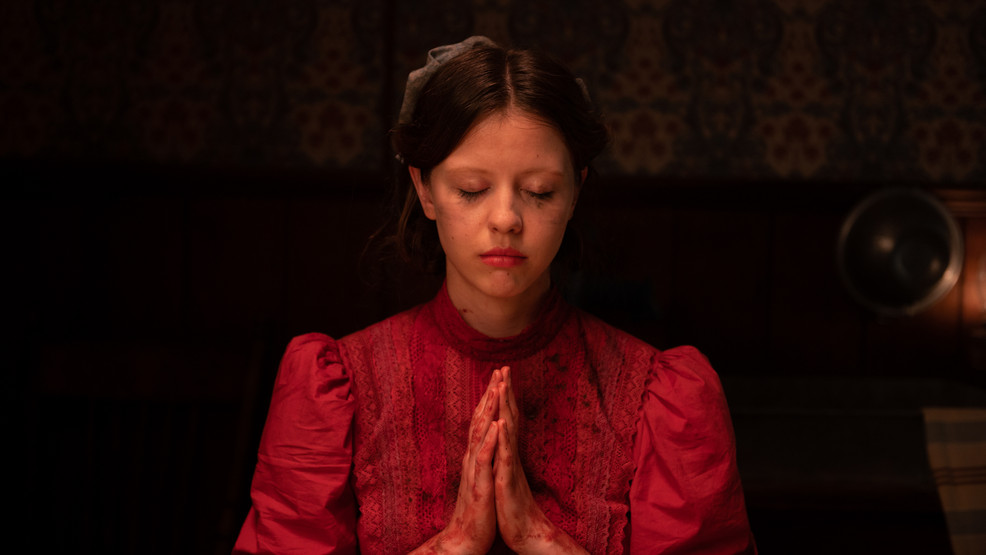 SALT LAKE CITY (KUTV) – Studio Synopsis: Filmmaker Ti West returns with another chapter from the twisted world of X, in this astonishing follow-up to the year’s most acclaimed horror film. Trapped on her family’s isolated farm, Pearl must tend to her ailing father under the bitter and overbearing watch of her devout mother. Lusting for a glamorous life like she’s seen in the movies, Pearl’s ambitions, temptations and repressions all collide, in the stunning, technicolor-inspired origin story of X’s iconic villain.

If you are familiar with West’s work, you’ll already know that the director/writer primarily works in the horror genre. You’ll know that things are not going to go well for the amateur film crew.

“Pearl” is a prequel to “X” that explores the early-adult life of Pearl. Mia Goth, who stared as both one of the young filmmakers and the elderly Pearl (with the aid of some fantastic effects makeup), returns as the young version of Pearl (sans makeup).

Where “X” was a rough nod to ‘70s cinema, “Pearl” is a technicolor-inspired nightmare that takes the mood and tone of the brightly colored films of the 1950s. Pearl is the classic debutant, a farmgirl who dreams of running off to Hollywood where she, without question, will be a star. She’s convinced of that. For now, she lives with her mother and disabled father on the farm. Ruth (Tandi Wright), her mother, is a hard German woman who fears for her and her daughter’s future as the first World War nears its end. This is also the era of the Spanish Flu pandemic. Pearl’s home is a place where paranoia, pride, and resentment abound.

Pearl’s only real escape comes when she goes into town to buy her father’s medicine. While there, Pearl foolishly goes to the cinema believing her mother won’t notice.

But there is something wrong with Pearl. She is immature for a married woman (her husband, Howard, is fighting in the war) and has an uncontrollable impulse for violence. As her dreams of escape begin to slip away, Pearl’s mental stability is quick to follow.

I love “Pearl” as a prequel. Most of what we learn about her as a young woman was clear in “X,” but that doesn’t make “Pearl” redundant or obsolete. It’s a pressure cooker for those who have seen “X.” I wonder how it plays who those who haven’t.

Goth, who shares a writing credit with West, does a tremendous amount of ACTING in “Pearl.” Everything is over the top. While that might not work in a movie that wasn’t striding the line between satire and homage to classic Hollywood cinema, it works here. I’m sure there will be some who disagree. If you want something more nuanced from Goth, you could always watch “Emma.,” “Mayday,” or “Marrowbone.” You should probably watch those films anyway.

I liked “X,” but I didn’t think it needed a sequel or a prequel. After watching “Pearl” I think I might like the film even more now. If “Pearl” isn’t better than “X,” it at the very least makes the world of “X” far more interesting to me. Sometimes horror films need to feel like an intellectual assault. “Pearl” beat me black and blue.

Pearl’s smiles are the stuff nightmares are made from.