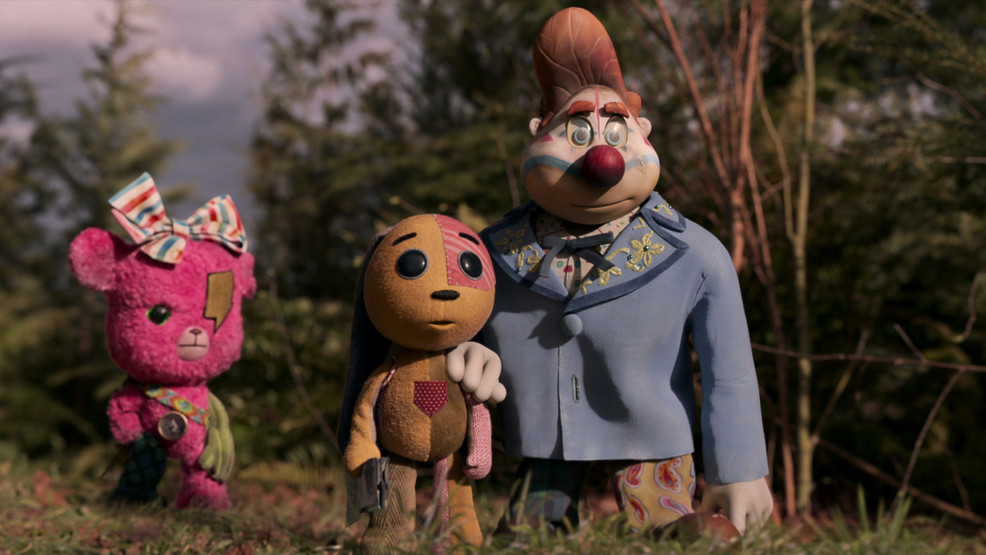 So, last week I managed to overlook that HBO's "House of Dragons" would be releasing its first episode (the second will come this week) and I forgot to mention that the fourth season of the makeup reality series "Glow Up" finally arrived on Netflix. I might have binged it in one sitting.

My top recommendations for the week are Netflix's family-friendly drama "Lost Ollie" and George Miller's new film "3,000 Days of Longing." If you're a fan of soapy dramas, Netflix's "Partner Track" is a solid option.

I was fortunate to interview Arden Cho for "Partner Track" and I've included the whole interview bellow. I also spoke with Gina Rodriguez and Jonathan Groff for "Lost Ollie." I've included a bite from Groff and you can view the full interview with some background context here. It went in a different direction than I expected, but ultimately there's an interesting conversation about art and healing that I think you'll enjoy (even if I'm talking far too much).

Studio Synopsis: Lost Ollie is an epic adventure about a lost toy who braves the many dangers of childhood as he searches the countryside to reunite with the boy who lost him; and the story of the boy who lost more than a best friend. It’s a heartwarming tale for the child in us all, remembering those special souls that we’ve lost but who forever changed our lives. The four-part limited series was inspired by the book Ollie’s Odyssey by renowned author and illustrator William Joyce.
Starring: Jake Johnson, Gina Rodriguez, and Kesler Talbot and featuring the voices of Jonathan Groff, Tim Blake Nelson, and Mary J. Blige.
Genre: Fantasy, Family, Drama
Rated: TV-PG
Mini Review: There are so many details in this beautiful series that reflect the experiences and atmosphere of my childhood that it is impossible for me not to love it. The combination of live-action photography and animation is stunning. [Full Review]
Where to Watch: Netflix

Studio Synopsis: Dr. Alithea Binnie (Tilda Swinton) is an academic - content with life and a creature of reason. While in Istanbul attending a conference, she happens to encounter a Djinn (Idris Elba) who offers her three wishes in exchange for his freedom. This presents two problems. First, she doubts that he is real and second, because she is a scholar of story and mythology, she knows all the cautionary tales of wishes gone wrong. The Djinn pleads his case by telling her fantastical stories of his past. Eventually she is beguiled and makes a wish that surprises them both.
Starring: Tilda Swinton, Idris Elba
Genre: Fantasy, Romance, Drama
Rated: R for some sexual content, graphic nudity and brief violence
Mini Review: "3,000 Years of Longing" feels like the serious cousin to Terry Gilliam's "The Adventures of Baron Munchausen" as it takes the audiences on a visually delicious journey through the centuries. I'm still debating on how to grade it. Is it too disjointed? I don't know yet. I do know that I loved watching it and will do so again.
Where to Watch: Theaters

Studio Synopsis: Ingrid Yun, a 1st generation Korean American and the first lawyer in her family, experiences the trials and tribulations of excelling at the prestigious (but old school) law firm, Parsons Valentine. With the support of her friends, she battles through workplace challenges to break through the glass ceiling on her path to become partner. But will her drive and ambition leave room for love?
Starring: Arden Cho, Bradley Gibson, Alexandra Turshen, Rob Heaps, Dominic Sherwood
Genre: Drama, Romance
Rated: TV-MA
Mini Review: It's very much a soap opera, but once you get past the familiarity of the first four episodes the series begins to blaze new trails when it comes to being an Asian-American trying to succeed in a cutthroat industry.
Where to Watch: Netflix

Studio Synopsis: Thirteen-year-old Sam Cleary (Javon “Wanna” Walton) suspects that his mysterious and reclusive neighbor Mr. Smith (Sylvester Stallone) is actually a legend hiding in plain sight. Twenty years ago, Granite City’s super-powered vigilante, Samaritan, was reported dead after a fiery warehouse battle with his rival, Nemesis. Most believe Samaritan perished in the fire, but some in the city, like Sam, have hope that he is still alive. With crime on the rise and the city on the brink of chaos, Sam makes it his mission to coax his neighbor out of hiding to save the city from ruin.
Starring: Sylvester Stallone, Javon “Wanna” Walton, Pilou Asbæk, Dascha Polanco, Moises Arias
Genre: Action, Drama, Fantasy
Rated: PG-13 for strong violence and strong language
Where to Watch: Prime Video

Studio Synopsis: The newest comedy from creator and star Sharon Horgan, “Bad Sisters” is a delicious blend of both dark comedy and thriller set in the breathtaking coast of Ireland. The new 10-episode series follows the lives of the Garvey sisters, who are bound together by the premature death of their parents and a promise to always protect one another. In addition to Horgan, “Bad Sisters” stars Anne-Marie Duff, Eva Birthistle, Sarah Greene and Eve Hewson as the Garvey sisters. The ensemble cast also includes Claes Bang, Brian Gleeson, Daryl McCormack, Assaad Bouab and newcomer Saise Quinn.
Starring: Sharon Horgan, Eva Birthistle, Sarah Greene, Eve Hewson
Genre: Comedy, Drama, Thriller
Rated: TV-MA
Where to Watch: Apple TV+