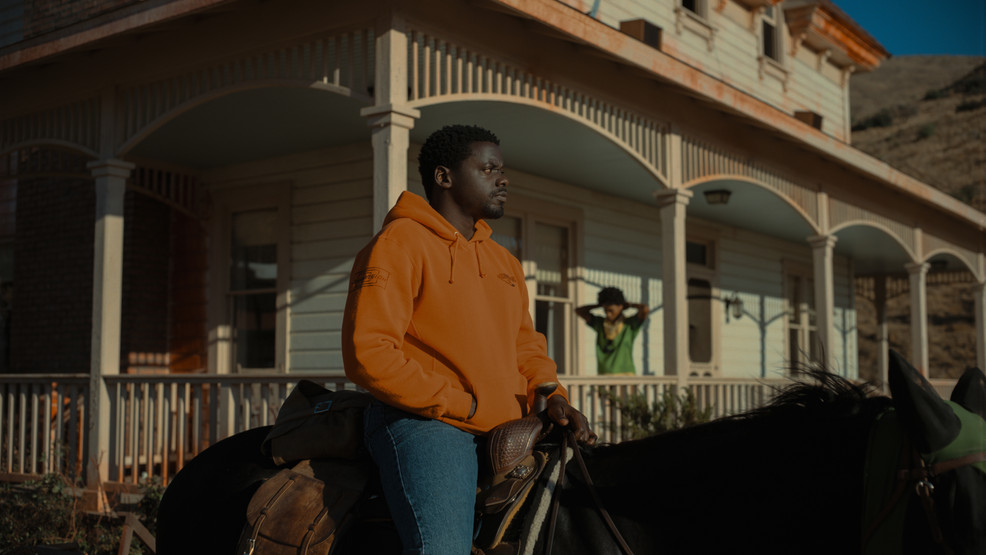 It's Pioneer weekend for those of us in Utah. That means, at this very moment, strangers are setting up chairs and blankets around my apartment building to watch tomorrow morning's parade. If I'm lucky, someone will bring a blowhorn. Fortunately I have a movie screening in the morning. Unfortunately that means I'll have to leave two hours early just to get out of my neighborhood. Living on a parade route isn't as amusing as you might think. Maybe I'll set up a lemonade stand.

None of that matters to you. You want to know if there is anything worthwhile to watch this weekend.

Official Synopsis: The residents in a lonely gulch of inland California who bear witness to an uncanny and chilling discovery.

Mini Review: Reviewing a Jordan Peele film is part blessing and part curse. The blessing comes in watching films by an artist with a unique voice and vision. The curse is you never know how deep Peele wants audiences to dig beneath the surface. Outside of the film history lesson, I'm not entirely sure that I fully grasp what Peele is trying to say with his unusual sci-fi movie. Sometimes when you focus on the fine detail you lose track of the entire picture. That applies to both audiences and artists. I know that there are parts of "Nope" that I think are fantastic. There are also scenes and subplots that don't feel necessary. But maybe I'm missing the point. You need to see "Nope" for yourself. Love them or hate them, Peele's movies need to be seen. [Full Review]

Official Synopsis: The Gray Man is CIA operative Court Gentry (Ryan Gosling), aka, Sierra Six. Plucked from a federal penitentiary and recruited by his handler, Donald Fitzroy (Billy Bob Thornton), Gentry was once a highly-skilled, Agency-sanctioned merchant of death. But now the tables have turned and Six is the target, hunted across the globe by Lloyd Hansen (Chris Evans), a former cohort at the CIA, who will stop at nothing to take him out. Agent Dani Miranda (Ana de Armas) has his back. He’ll need it.

Mini Review: Many, including myself, consider "Captain America: The Winter Soldier" to be the pinnacle of the Marvel Cinematic Universe. So, I approached "The Gray Man" with anticipation (even though the last Russo Brothers film, "Cherry," was something of a misfire). Sometimes success can be a burden. "The Gray Man" isn't remotely as smart or entertaining as "The Winter Soldier." It feels like a lesser James Bond thriller that doesn't quite have the gravitas to be taken seriously. If viewed as a nonsensical melodrama it almost works.

Where to watch: Theaters, Netflix

Official Synopsis: After a dramatic end to season two, the eight-episode third season picks up with Nikki (BAFTA nominee Esther Smith) and Jason (SAG Award nominee Rafe Spall) waking up as new parents to two children they are still getting to know. Now they just have to keep hold of them, which proves to be trickier than they initially thought. Thrown straight into the parental deep end, Nikki and Jason’s relationships with each other and with their nearest and dearest are tested as they desperately try to navigate the ups and downs of parenting — while hanging onto their kids, and their sanity.

Where to watch: Apple TV+

Official Synopsis: Katia and Maurice Krafft loved two things — each other and volcanoes. For two decades, the daring French volcanologist couple roamed the planet, chasing eruptions and documenting their discoveries. Ultimately, they lost their lives in a 1991 volcanic explosion, leaving a legacy that forever enriched our knowledge of the natural world.