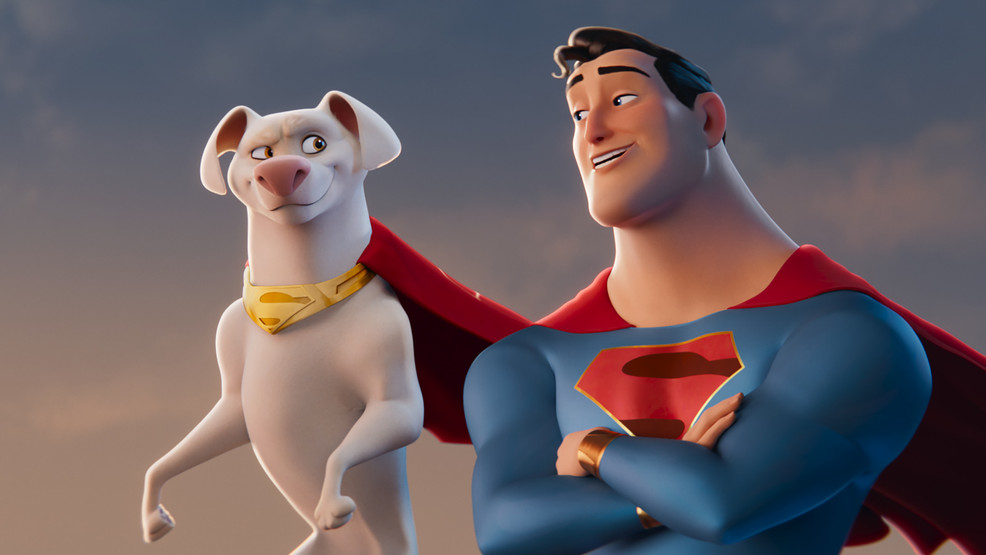 It's been one of those weeks where I'd like to tell the world, "Shhh... I'm trying to catch up on Locke & Key." Unfortunately, that doesn't appear to be an option. So, we'll take a look at a few of this week's bounty of options.

The biggest release is "DC League of Super-Pets" and while it doesn't do anything unexpected, it is on par with "Minions: The Rise of Gru." Our other theatrical option this week is "Vengeance," a comedy that turns into a drama that evolves into something else. The film was written, directed, and stars B.J. Novak (Ryan from "The Office").

On the streaming side of things I made my way through (it wasn't a struggle) Disney+'s six-part documentary "Light & Magic," a history of the special effects company Industrial Light & Magic. It was a struggle to make my way through Netflix's "The Most Hated Man on the Internet." Hate culture on the internet isn't a new phenomenon and Hunter Moore is just the tip of a very large iceberg.

I didn't have a chance to sit down with any of the other streaming releases this week, but I hope to squeeze in Hulu's romantic comedy "Honor Society" with Gaten Matarazzo and Angourie Rice, and HBO's documentary "We Met In Virtual Reality." This week also sees the digital release of the pandemic drama "Alone Together" with Katie Holmes and Hulu's "Not Okay" with Zoey Deutch.

Studio Synopsis: Krypto the Super-Dog and Superman are inseparable best friends, sharing the same superpowers and fighting crime side by side in Metropolis. However, when the Man of Steel and the rest of the Justice League are kidnapped, Krypto must convince a ragtag group of animals to master their own newfound powers for a rescue mission.

Recommendation: I prefer "Super-Pets" to this summer's other traditional animated offerings "Minions: The Rise of Gru" and "Paws of Fury." It's not leaps and bounds better than its colleagues, it's just more appealing to me. It's also nice to see DC offering a family-friendly option for those too young for the bulk of their recent releases. [Full Review]

Where to Watch: Theaters

Studio Synopsis: Granted unparalleled access, Academy Award-nominated filmmaker Lawrence Kasdan takes viewers on an adventure behind the curtain of Industrial Light & Magic. Learn about the pioneers of modern filmmaking as we go on a journey to bring George Lucas' vision to life. These filmmakers would then go on to inspire the entire industry of visual effects.

Recommendation: This documentary about special effects company Industrial Light & Magic is top heavy on Star Wars material, but that shouldn't surprise anyone. There are new interviews to accompany archive footage. So, even if you've watched every documentary about Star Wars, there's new details and stories in the six-part series.

Where to watch: Disney+

Studio Synopsis: VENGEANCE, the directorial debut from writer and star B.J. Novak (“The Office”), is a darkly comic thriller about Ben Manalowitz, a journalist and podcaster who travels from New York City to West Texas to investigate the death of a girl he was hooking up with.

Recommendation: What starts out as a comedy with a unlikable protagonist transforms into a interesting murder mystery rife with social critique of podcast culture and storytellers in general. It's a bold directorial debut. [Full Review]

The Most Hated Man on the Internet

Studio Synopsis: Hunter Moore was a self-proclaimed “professional life ruiner” who found fame in the early 2010s by founding IsAnyoneUp.com, a notorious revenge porn hub. The site posted explicit photos of women and men, often without their permission and with devastating results. He built a cult following of those who hung on his every raunchy move. Featuring poignant, exclusive interviews with multiple women and men who fought to have their images taken down, law enforcement agents who worked the case and the crusaders who fought to take Moore down, this three-part series documents his comeuppance at the hands of the only force more fearsome than an army of internet trolls: a mother protecting her daughter. The series is executive produced by Alex Marengo (Bad Sport, Killer Ratings).

Recommendation: A crash course in hate culture, victim blaming, human toxicity, the dangerous allure of being internet famous, and how a determined mother helped to tear it down. Unfortunately, the spirit of Hunter Moore still haunts us. He wasn't the first sociopath and he won't be the last .

Studio Synopsis: Honor (Angourie Rice) is an ambitious high school senior whose sole focus is getting into an Ivy League college...assuming she can first score the coveted recommendation from her guidance counselor, Mr. Calvin. Willing to do whatever it takes, Honor concocts a Machiavellian-like plan to take down her top three student competitors, until things take a turn when she unexpectedly falls for her biggest competition, Michael (Gaten Matarazzo).

Where to Watch: Paramount+

We Met In Virtual Reality

Studio Synopsis: Filmed entirely inside the world of virtual reality (VR), this immersive and revealing documentary roots itself in several unique communities within VR Chat, a burgeoning virtual reality platform. Through observational scenes captured in real-time, in true documentary style, the film reveals the growing power and intimacy of several relationships formed in the virtual world, many of which began during the COVID-19 lockdown while so many in the physical world were facing intense isolation. Although remaining wholly within the VR domain of avatars and imagined worlds, the film has elements of humor, serendipitous interactions and unexpected events that characterize real life.

Where to watch: HBO Max

Studio Synopsis: Going upstate for a short romantic getaway to escape the pandemic in New York City, food critic June's (Katie Holmes) plans go wrong from the start. Arriving at the AirBnb in advance of her boyfriend, John (Derek Luke), she is shocked to discover it has been double-booked by recently single Charlie (Jim Sturgess). When John decides to stay in the city to take care of his parents, June has to settle in for the long haul as she realizes that the initial two weeks of the pandemic might just drag on a little bit longer than expected. As spring begins to unfold around them, June and Charlie make the most of the sudden break in their routines and develop an unexpected intimacy as they bond over their goals, ambitions and, of course, relationships.

Studio Synopsis: NOT OKAY follows Danni Sanders (Zoey Deutch), an aimless aspiring writer with no friends, no romantic prospects and — worst of all — no followers, who fakes an Instagram-friendly trip to Paris in the hopes of boosting her social media clout. When a terrifying incident strikes the City of Lights, Danni unwittingly falls into a lie bigger than she ever imagined. She "returns" a hero, even striking up an unlikely friendship with Rowan (Mia Isaac), a school-shooting survivor dedicated to societal change, and scooping up the man of her dreams Colin (Dylan O'Brien). As an influencer and advocate, Danni finally has the life and audience she always wanted. But it’s only a matter of time before the facade cracks, and she learns the hard way that the Internet loves a takedown.

Where to watch: Hulu