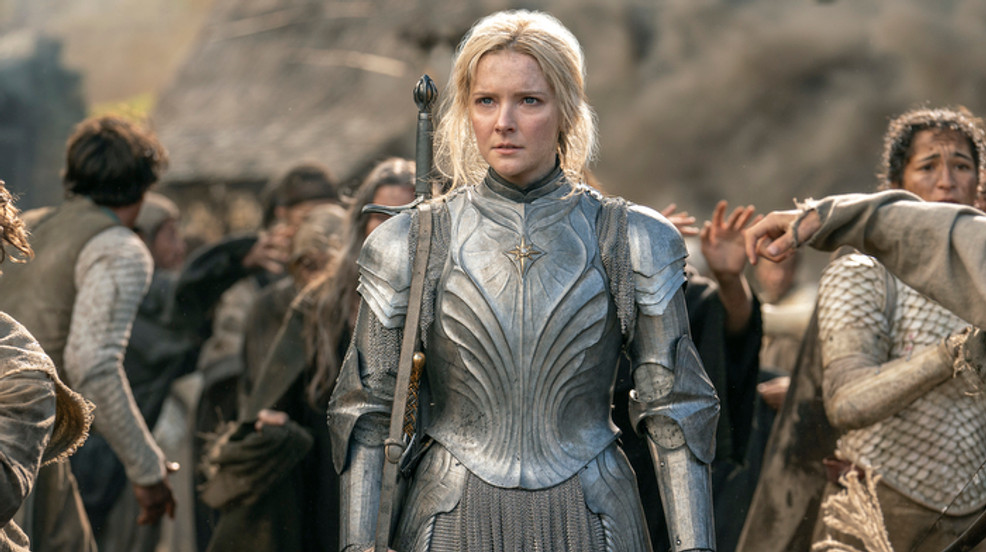 Morfydd Clark as “Galadriel” in Prime Video's The Lord of the Rings: The Rings of Power (Photo: Prime Video/Matt Grace)

The biggest release of the week is undoubtedly the first two episodes from Prime Video's "The Lord of the Rings: The Rings of Power." I've enjoyed what I've seen, but I'm withholding any sort of definitive judgement until I've had the opportunity to watch all eight episodes from this first season. Elsewhere (in theaters and on Peacock to be more specific) we had the Sundance Film Festival film "Honk for Jesus. Save Your Soul," a megachurch satire. Those looking for something on the art house side of the street will want to consider "The Good Boss," a Spanish black comedy starring Javier Bardem.

I really wanted to watch "Burial," a fictional World War II thriller about Russian soldiers who attempt to bring Adolf Hitler's remains to Joseph Stalin, but life got in the way. I'll hopefully be watching that tonight. I'm sure I'll be revisiting "The Rings of Power" in the next few days as well. I can get away with it because I've already watched a few upcoming films and series. There's some interesting stuff on the horizon.

Reviews for Netflix's romantic comedy "Love in the Villa" have been very good. I'm still more likely to check out their new horror series "Devil in Ohio."

Here's a look at those titles and a few other options for this weekend.

The Lord of the Rings: The Rings of Power

Studio Synopsis: The Lord of the Rings: The Rings of Power brings to screens for the very first time the heroic legends of the fabled Second Age of Middle-earth's history. This epic drama is set thousands of years before the events of J.R.R. Tolkien’s The Hobbit and The Lord of the Rings, and will take viewers back to an era in which great powers were forged, kingdoms rose to glory and fell to ruin, unlikely heroes were tested, hope hung by the finest of threads, and the greatest villain that ever flowed from Tolkien’s pen threatened to cover all the world in darkness. Beginning in a time of relative peace, the series follows an ensemble cast of characters, both familiar and new, as they confront the long-feared re-emergence of evil to Middle-earth. From the darkest depths of the Misty Mountains, to the majestic forests of the elf-capital of Lindon, to the breathtaking island kingdom of Númenor, to the furthest reaches of the map, these kingdoms and characters will carve out legacies that live on long after they are gone.
Starring: Morfydd Clark, Lenny Henry, Markella Kavenagh, Sara Zwangobani
Genre: Fantasy, Action, Drama
Rated: TV-14
Reaction: It would be premature to declare "The Rings of Power" a success, but I would have happily watched a third episode if I had been able to. The direction, production, and acting is all strong. I'm by no means a J. R. R. Tolkien scholar, but the tone felt right and it's just familiar enough to evoke the magic of Peter Jackson's adaptations.
Where to Watch: Prime Video

Honk for Jesus. Save Your Soul

Studio Synopsis: A satirical comedy starring Regina Hall as Trinitie Childs - the proud first lady of a Southern Baptist megachurch, who together with her husband Pastor Lee-Curtis Childs (Sterling K. Brown), once served a congregation in the tens of thousands. But after a scandal forces their church to temporarily close, Trinitie and Lee-Curtis must reopen their church and rebuild their congregation to make the biggest comeback that commodified religion has ever seen.
Starring: Regina Hall, Sterling K. Brown, Austin Crute, Conphidance
Genre: Comedy, Drama
Rated: R for language and some sexual content.
Reaction: Hall and Brown give passionate performances, but the material isn't nearly as funny or scathing as it needs to be.
Where to Watch: Theaters, Peacock

Studio Synopsis: Básculas Blanco, a Spanish company producing industrial scales in a provincial Spanish town, awaits the imminent visit from a committee which holds its fate in their hands as to whether they merit a local Business Excellence award. Everything has to be perfect when the time comes. Working against the clock, the company’s proprietor, Blanco (Bardem) pulls out all the stops to address and resolve issues with his employees, crossing every imaginable line in the process.
Starring: Javier Bardem, Manolo Solo, Almudena Amore, Oscare de la Fuente, Sonia Almarcha
Genre: Comedy, Drama
Rated: NR (Nudity, Strong Language)
Reaction: It's not breaking news that Javier Bardem is a fantastic actor who gives depth to even the most shallow of characters. So, it should be no surprise that his performance as an unsympathetic business owner is entertaining enough to carry the narrative through its most predictable moments.
Where to Watch: Theaters

Studio Synopsis: Set during the waning days of World War II, BURIAL tells the fictional story of a small band of Russian soldiers tasked with delivering the crated remains of Hitler back to Stalin in Russia. En route, the unit is attacked by German “Werewolf” partisans and picked off one-by-one. An intrepid female intelligence officer leads her surviving comrades in a last stand to ensure their cargo doesn’t fall into the hands of those who would hide the truth forever.
Starring: Charlotte Vega, Tom Felton
Genre: War, Thriller
Rated: NR
Where to Watch: Theaters, VOD

Love in the Villa

Studio Synopsis: A young woman takes a trip to romantic Verona, Italy, after a breakup, only to find that the villa she reserved was double-booked, and she'll have to share her vacation with a cynical British man.
Starring: Kat Graham, Tom Hopper
Genre: Romance, Comedy
Rated: TV-14
Where to Watch: Netflix

Studio Synopsis: Nate Gibson’s life is turned upside down after he suffers a near-fatal illness and is left a quadriplegic. Moving forward seems impossible until he meets his unlikely service animal, Gigi – a curious and intelligent capuchin monkey – who helps Nate find what he needs most: hope.Starring: Charlie Rowe, Marcia Gay Harden, Jim Belushi
Genre: Drama, Family
Rated: PG-13 for some thematic material and language.
Where to Watch: Theaters