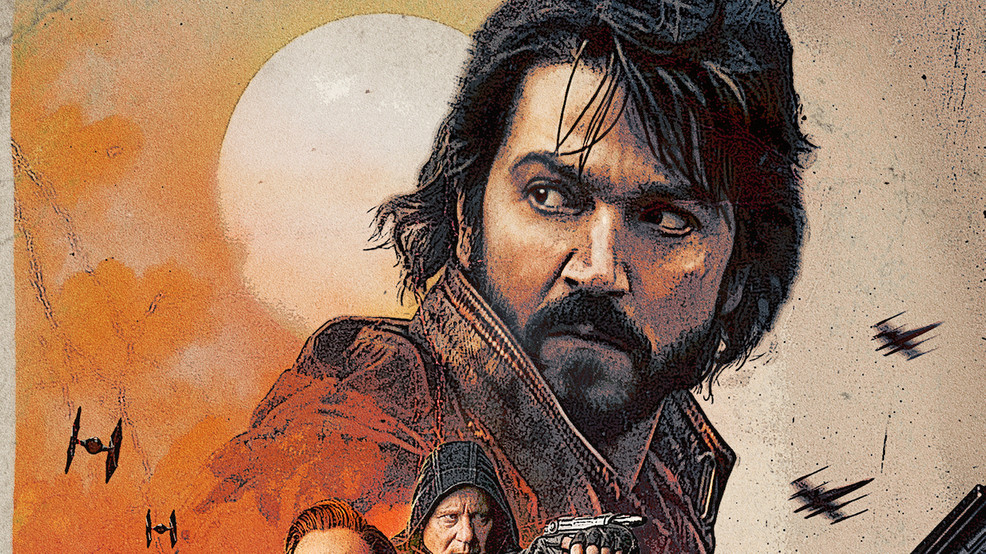 This week's dive isn't nearly as deep as it has been in the past. I'm blaming a combination of FanX Salt Lake Pop Culture and Comic Convention and my sister's wedding. Sadly, these are two separate events. Otherwise I'd ask Gaten Matarazzo officiate (and it would be awesome). I'll be hanging out with him, Eduardo Franco, and Grace Van Dien at the Stranger Things Spotlight Q&A Saturday morning. Swing by the ballroom if you so happen to be in Salt Lake City.

Last week I failed to mention the new David Bowie documentary "Moonage Daydream" that has been playing in IMAX. I caught a late showing on Tuesday night and it's absolutely amazing. There's not enough post-1990 material, but that would require a 4-hour runtime. If you are a fan (or feel like going on a psychedelic journey), you absolutely need to see it.

I was fortunate enough to be sent the first four episodes of the new Star Wars series "Andor." I've watched them twice. You can watch the first three on Disney+ with new episodes arriving on Wednesdays. I was less fortunate to see "Don't Worry Darling." It's certainly a curiosity (and not just for the behind-the-scenes mayhem) that really should have been better.

I'll play some catch up this weekend once I get through the wedding and the upside down. "Lou" and "Sidney" being my likely Sunday double feature. Odd bedfellows to be sure.

Studio Synopsis: “Andor” takes place five years before the events of “Rogue One,” when the seeds of rebellion against the Empire were germinating. The special footage from “Andor” offers audiences a look at the story, which explores a new perspective from theStar Warsgalaxy, focusing on Cassian Andor’s journey to discover the difference he can make. The series brings forward the tale of the burgeoning rebellion against the Empire and how people and planets became involved. It is an era filled with danger, deception and intrigue where Cassian will embark on the path that is destined to turn him into the rebel hero that we see in “Rogue One.”
Starring: Diego Luna, Genevieve O’Reilly, Stellan Skarsgård, Adria Arjona, Denise Gough, Kyle Soller, Fiona Shaw and Faye Marsay
Genre: Sci-Fi, Action Sci-Fi, Action
Rated:TV-14 for language and violence
Reaction: I've only been given access to the first four episodes. They're great. [Full Review]
Where to Watch: Disney+

Studio Synopsis: A visceral ride — a sexy psychological thriller about a woman whose idyllic life begins to crack, threatening a disturbing reality underneath. In a glamorous world where everything looks perfect, but nothing is what it seems, Alice must decide how far she will go to uncover the disturbing truth.
Starring: Florence Pugh, Olivia Wilde, Chris Pine, Harry Styles
Genre: Drama, Sci-Fi, Thriller
Rated: R for sexuality, violent content and language
Reaction: Neither a masterpiece nor a train wreck. I'm genuinely surprised by how apathetic I am about the film. [Full Review]
Where to Watch: Theaters

Studio Synopsis: From producer Oprah Winfrey and directed by Academy Award nominee Reginald Hudlin, this revealing documentary honors the legendary Sidney Poitier and his legacy as an iconic actor, filmmaker and activist at the center of Hollywood and the Civil Rights Movement. Featuring candid interviews with Denzel Washington, Halle Berry, Robert Redford, Lenny Kravitz, Barbra Streisand, Spike Lee and many more, the film is also produced by Derik Murray, in close collaboration with the Poitier family.
Genre: Documentary
Rated: TV-G
Where to Watch: Apple TV+

Studio Synopsis: Guy Pearce stars in this psychological thriller of obsession and deceit. Bruce Cogburn (Pearce), a reclusive and controversial author of the famed book The Infernal Machine, is drawn out of hiding when he begins to receive endless letters from an obsessive fan. What ensues is a dangerous labyrinth as Bruce searches for the person behind the cryptic messages forcing him to confront his past and ultimately revealing the truth behind The Infernal Machine.
Starring: Guy Pearce, Alice Eve with Jeremy Davies and Alex Pettyfer
Genre: Thriller
Rated: R for language and some violence
Where to Watch: Theaters, VOD

Studio Synopsis: Set in rural England against the backdrop of WW2 when children are flooding into the countryside to escape the bombing of industrial cities. With the help of Bobbie Waterbury (Jenny Agutter), a group of young evacuees are taken into her rural home and begin to settle into their new life. But when the children encounter a young soldier who, like them, is far away from home, a true adventure ensues.
Starring: Jenny Agutter, Sheridan Smith, John Bradley, Tom Courtenay, Beau Gadsdon, Jessica Baglow, Austin Haynes, Gabriel Freilich, Kenneth Aikens, Eden Hamilton
Genre: Adventure, Drama, Family
Rated: PG for thematic material, some violence and language
Where to Watch: Theaters

Studio Synopsis: A storm rages. A young girl is kidnapped. Her mother (Jurnee Smollett) teams up with the mysterious woman next door (Allison Janney) to pursue the kidnapper – a journey that tests their limits and exposes shocking secrets from their pasts.
Starring: Allison Janney, Jurnee Smollett
Genre: Action, Drama
Rated: R for violence and language.
Where to Watch: Netflix