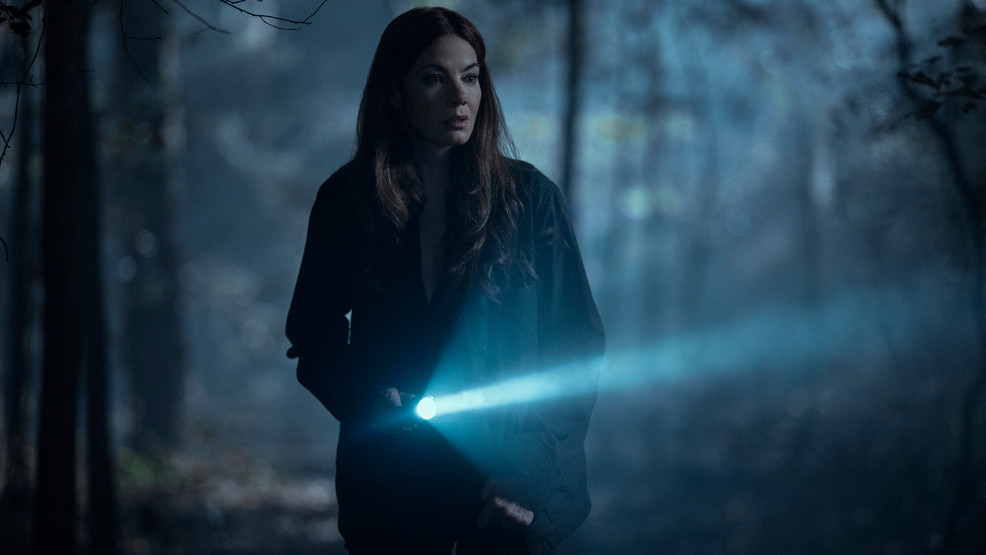 It's a big week for streaming as Netflix gives us the Michelle Monaghan thriller "Echoes," Marvel brings "She-Hulk: Attorney at Law" to Disney+, and Apple TV+ debuts "Bad Sisters," a new comedy from Sharon Horgan (Disenchantment). I'd recommend a weekend binge of "Echoes," I'm going to need to see more of "She-Hulk" before I offer a final verdict, and I've yet to sit down with "Bad Sisters." I hope to make my way over to Paramount+ for "Orphan: First Kill" as we ease our way toward October.

The week's biggest theatrical release is probably "Beast" with Idris Elba. It wasn't screened for local critics (I did see a different Elba film, but we'll be talking about that next week). So, "Spin Me Round," a sort-of-comedy featuring Alison Brie and Aubrey Plaza, get a little bit of the spotlight. I wish I could unequivocally recommend the film, but it never really finds its footing or decides what it wants to be.

I've also included a swath of other titles, most indie, that are making their debuts this week. My hope is to help you (and myself) discover films and series that otherwise might go overlooked. It's a little chaotic in structure this week, but I'll have that sorted out as we go along.

Check out my interview with Michelle Monaghan as we breakdown some of the challenges of her playing twin sisters in "Echoes." It's an educating three minutes that gives a little insight to her process. Our new lighting has me looking rather cooked. Might be time to revisit the pale makeup of my youth.

Studio Synopsis: Echoes is a mystery thriller about two identical twins, Leni and Gina, who share a dangerous secret. Since they were children, Leni and Gina have secretly swapped lives, culminating in a double life as adults: they share two homes, two husbands, and a child but everything in their perfectly choreographed world is thrown into disarray when one of the sisters goes missing.
Starring: Michelle Monaghan, Matt Bomer, Junathan Tucker, Karen Robinson
Genre: Mystery, Thriller
Rated: TV-MA
Mini Review:"Echoes" doesn't set out to reinvent the wheel. It's more of a vehicle to show off Michelle Monaghan's talents in multiple roles and provide a narrative that will keep you watching. It's addictive and completely bingeable. I was only sent the first six episodes, I'll be watching the finale tonight. [Full Review]
Where to Watch: Netflix

Studio Synopsis: In Marvel Studios’ “She-Hulk: Attorney at Law,” Jennifer Walters (Tatiana Maslany) — an attorney specializing in superhuman-oriented legal cases — must navigate the complicated life of a single, 30-something who also happens to be a green 6-foot-7-inch superpowered Hulk. The nine-episode comedy series welcomes a host of MCU vets, including Mark Ruffalo as Smart Hulk, Tim Roth as Emil Blonsky/the Abomination, and Benedict Wong as Wong, as well as Jameela Jamil, Josh Segarra, Ginger Gonzaga, Jon Bass and Renée Elise Goldsberry.
Starring: Tatiana Maslany, Benedict Wong, Mark Ruffalo
Genre: Comedy, Action
Rated: TV-14
Mini Review: I think Tatiana Maslany is a great actress and is well cast as Jennifer Walters, I'm just not entirely onboard with what I've seen in the first four episodes of "She-Hulk: Attorney at Law." I'm not a huge sitcom watcher and this is as close to a sitcom as Marvel has done since the 1980s. That doesn't mean I won't be watching the remainder of the season. I would have and will do once the episodes are available to me. Even if my opinion of the show doesn't change, I'm looking forward to seeing Maslany take the character to the big screen.
Where to Watch: Disney+

Studio Synopsis: When the manager of an American chain restaurant is selected to attend a special training program in Italy, her head swims with dreams of European glamour and romance. But the trip turns out to be much different—and possibly more dangerous—than the exotic getaway she imagines.
Starring: Alison Brie, Aubrey Plaza, Alessandro Nivola
Genre: Comedy
Rated: Not Rated (Nudity, Language)
Mini Review: The promotional material makes "Spin Me Round" look like a romcom satire, but the film itself isn't remotely that focused. Co-written by Jeff Baena (The Little Hours, Life After Beth) and Alison Brie, the narrative prioritizes creepy over comedy and pretty much goes off the rails in its final act. Amusing at times, but rarely funny. I do like that when doing a search for the film's trailer I was directed to the Dead or Alive music video. So, there's that.
Where to Watch: Theaters

Studio Synopsis: Idris Elba plays Dr. Nate Daniels, a recently widowed husband who returns to South Africa, where he first met his wife, on a long-planned trip with their daughters to a game reserve managed by Martin Battles (Sharlto Copley, Russian Doll series, Maleficent), an old family friend and wildlife biologist. But what begins as a journey of healing jolts into a fearsome fight for survival when a lion, a survivor of blood-thirsty poachers who now sees all humans as the enemy, begins stalking them.
Starring: Idris Elba, Sharlto Copley, Leah Jeffries, Iyana Halley
Genre: Adventure, Drama
Rated: R for violent content, bloody images and some language.
Where to Watch: Theaters

Studio Synopsis: The new 10-episode series follows the lives of the Garvey sisters, who are bound together by the premature death of their parents and a promise to always protect one another
Starring: Sharon Horgan, Anne-Marie Duff, Eva Birthistle, Sarah Greene, and Eve Hewson.
Genre: Comedy, Thriller
Rated: TV-MA
Where to Watch: Apple TV+

Studio Synopsis: To impress his girlfriend's wealthy parents, a pathological liar borrows $4 million from a crime syndicate to purchase a mansion. Unfortunately for him, all debts need to be paid back.
Starring: Melanie Chandra, Ian Niles, Catherine Curtin
Genre: Comedy
Rated: Not Rated
Where to Watch: Digital On Demand

Studio Synopsis: Lili Reinhart stars as Natalie, a young woman whose life diverges into two different paths on the night of her college graduation. In one life, she becomes pregnant and must navigate motherhood as a young adult in her hometown and in the other she moves to LA to pursue her career. In both journeys, Natalie experiences life-changing love, pursues her dream career as an artist, and rediscovers herself. LOOK BOTH WAYS also stars Danny Ramirez, David Corenswet, Aisha Dee, Andrea Savage, Luke Wilson, Nia Long and is directed by Wanuri Kahiu.
Starring: Lili Reinhart, Danny Ramirez, Aisha Dee
Genre: Comedy, Drama, Romance
Rated: TV-14
Where to Watch: Netflix

Studio Synopsis: Privileged teenager Aiden has one last chance to get his life back on track. His lucrative side hustle dealing drugs to his classmates and his own personal addiction has forced his distraught mother to turn him over to the police. If he acts as a confidential informant and sets up a major drug kingpin, the cops promise to reward his cooperation. As the sting operation is set in motion, Aiden falters, threatening to jeopardize the deal with the police and his very life. THE RUNNER is a gripping thriller.
Starring: Elisabeth Rohm, Eric Balfour, Jessica Amlee
Genre: Thriller
Rated: R for strong teen drug and alcohol use, pervasive language and some violence.
Where to Watch: Theaters, Digital On Demand

Studio Synopsis: Esther’s terrifying saga continues in this thrilling prequel to the original and shocking horror hit, Orphan. After orchestrating a brilliant escape from an Estonian psychiatric facility, Esther travels to America by impersonating the missing daughter of a wealthy family. Yet, an unexpected twist arises that pits her against a mother who will protect her family from the murderous “child” at any cost.
Starring: Isabelle Fuhrman, Rossif Sutherland, Julia Stiles
Genre: Drama, Horror
Rated: R for bloody violence, language and brief sexual content
Where to Watch: Theaters, Digital On Demand, Paramount+

Studio Synopsis: After a bad breakup, Wes (Ryan Kwanten) ends up at a remote rest stop miles away from civilization. His situation worsens after he finds himself locked inside the bathroom with a mysterious figure (J.K. Simmons) speaking to him from an adjacent stall. As Wes tries to escape, he finds himself an unwilling player in a situation bigger and more terrible than he could possibly imagineStarring: Ryan Kwanten, J.K. Simmons, Tordy Clark
Genre: Horror
Rated: Not Rated
Where to Watch: Shudder

In The Vault: Season 2

Studio Synopsis: Things at Woodlawn College get stranger and stranger with the discovery of coed Liv Steele’s killer. Will this secret be kept as residents of the Vault head into their sophomore year? And what does that bloody secret have to do with the kidnapped hooded figure languishing in the basement? Season Two of Crackle’s sexy suspense series In the Vault brings new mysteries, new twists, and new thrills to Woodlawn College.
Starring: Audrey Whitby, Claudia Lee, Paul Karmiryan, Caleb Castille, Timothy Granaderos
Genre: Horror
Rated: TV-MA
Where to Watch: Crackle

Studio Synopsis: Sprung follows Jack (Garret Dillahunt), a convicted criminal who is determined to turn his life around after serving more than two decades in prison. When he is unexpectedly released due to the COVID-19 pandemic, he quickly realizes he has no place to live. Jack shelters-in-place with former cellmate Rooster (Phillip Garcia), Rooster’s mom (Martha Plimpton), and Jack’s former prison girlfriend Gloria (Shakira Barrera). Their marred pasts and unusual living circumstances create a bond between them all, and they decide to start righting some of society’s wrongs that arise during the COVID-19 pandemic. Their first target is Melvin (Earl), an opportunist who alters his con based on supply and demand who has sparked a relationship with Wiggles (Clare Gillies), Rooster’s ex-girlfriend. Meanwhile, Congresswoman Paula Tackleberry (Kate Walsh) is telling the public there’s nothing to worry about, whilst using inside information to sell millions in stock.
Starring: Garret Dillahunt, Martha Plimpton, Phillip Garcia, Shakira Barrera
Genre: Comedy
Rated: 16+
Where to Watch: Freevee

Studio Synopsis: Filmmaker Aik Karapetian's dark fairy tale SQUEAL centers on Samuel (Kevin Janssens), who is far from home, searching for his father. Lost in remotest Eastern Europe, on the edges of a mythical forest, a minor road accident leads to a chance meeting with a pig-farmer’s daughter Kirke (Laura Silia). Sam soon learns that his priorities must change if he wants to survive. Her initial hospitality is a smoke screen to capture him and make him a forced laborer on the farm. Alone, unable to speak the language, and chained up 24/7 with the pigs, he learns to adapt. Fortunately, a seemingly magical piglet gains Sam’s confidence and shows him the way to freedom and true love.
Starring: Kevin Janssens,Laura Silia,Aigars Vilims,Normunds Griesti,Juris Bartkevis,Guntis Pilsums
Genre: Comedy, Drama, Fantasy
Rated: Not Rated
Where to Watch: Digital on Demand